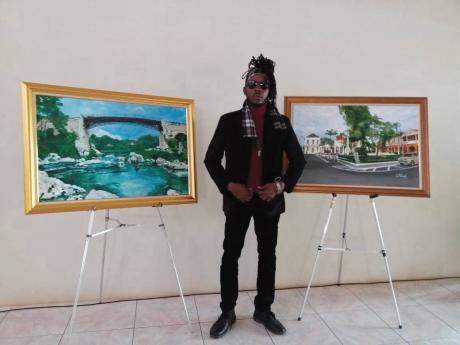 To date, Millwood has painted sceneries of historic sites in Spanish Town, including the Spanish Town Bridge and Spanish Town Square. His next parish series will seek to capture sites across Manchester, then Clarendon.

The Delroy Paints Jamaica launch was hosted at the Golf View Hotel in Manchester, which has partnered with Millwood to promote his artwork. The hotel’s managing director, Peter Campbell, said promoting local talent is a part of his team’s mandate. “We love his work and it fits in with Golf View’s vision of promoting Jamaican talent, so we decided to run with the vision and we are happy to host the launch,” said Campbell.

The partnership has led to Millwood participating in the hotel’s sip-and-paint sessions and his recent appearance on the YouTube series Business Feature-Untold Stories, hosted by Golf View’s Operations Manager, Patricia Kirlew-Garib, who lauded the artist as a fighter with a strong message and story to tell.

“He is very talented and we want to support him to reach his potential,” said Kirlew-Garib.

Millwood, a past student of the Edna Manley College of the Visual and Performing Arts, said February is a time to reflect on the teachings of his religion, Rastafarianism, and to “correct some false teachings that were handed to my people”.

The 38-year-old, who grew up in Spanish Town, St Catherine, noted a myriad of struggles he had to overcome as a high-school dropout. He said life was no easy feat, noting the struggles of his mother who worked as a vendor to fend for him and his six siblings.

“But as a youth, Spanish Town give me that fighter spirit. It gave me the muscles to never give up in certain struggle that come on this journey,” he shared with The Gleaner.

With views centred around the notion of Garveyism, Roberts cited the importance of promoting and nurturing black talent, adding, “We believe in the teachings of Marcus Garvey – one strong, unified black nation. The same way Garvey wanted to grow the black nation, we are here to help the black nation in whatever aspects of the arts, so I’m glad to be a part of this. We are always supporting the arts, and we enjoy and promote Black History Month,” he said.

Millwood’s painting Black Moses is ranked among the 173 best Jamaican paintings on Pinterest.

His work is available for purchase at https://delroymillwood.com/.