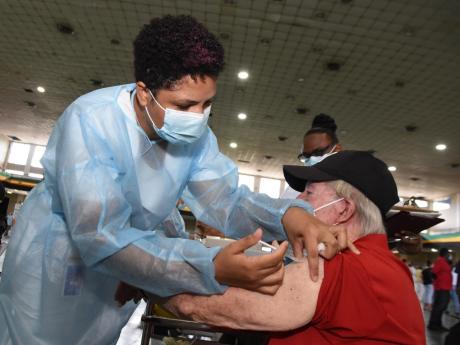 A senior citizen receives a first dose of the Oxford-AstraZeneca COVID-19 vaccine at the National Arena in St Andrew earlier today. The Ministry of Health and Wellness says 612 people, age 75 and over, received their first of two shots of the vaccine today. The second dose will be administered in six to eight weeks.

The Ministry of Health and Wellness achieved just a little more than 61 per cent of its target for today's mass vaccination.

It says 612 seniors, age 75 and over, received their first shot of the two-dose Oxford-AstraZeneca COVID-19 vaccine at the National Arena in St Andrew today. It was hoping to inoculate 1,000 seniors.

Four centenarians were among those who received their first dose, included a 102 year-old woman.

The 612 who were vaccinated represent 92 per cent of persons who were registered to be immunised at the site today, the health ministry said in a release this evening.

Minister of Health and Wellness, Dr Christopher Tufton was pleased with the largely smooth roll out of the vaccination blitz.

"We are really learning from this experience and I believe commendations are in order for the team: the army, the JCF (Jamaica Constabulary Force) and, of course, the health team that has led today," he told The Gleaner this afternoon.

Today's exercise commenced ahead of its 10:00 a.m. schedule, as several seniors and their caregivers arrived from as early 8:00 a.m. It closed at 3:00 p.m.

The blitz was the first in a series of mass vaccinations planned by the ministry. The next is to take place at the arena on April 3.

The ministry says persons who have received their first shot of the COVID-19 vaccine must continue to observe all the infection prevention and control measures.