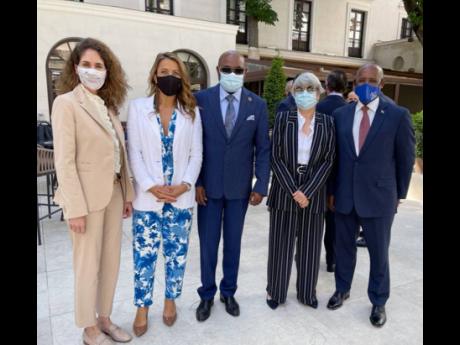 Contributed
Minister of Tourism Edmund Bartlett (centre) and minister without portfolio in the Ministry of Economic Growth and Job Creation, Senator Aubyn Hill (right), are joined by (from left) Sabrina Fluxa of Iberostar; Encarna Piniero of Bahia Principe; and Carmen Rui of RIU hotels at FITUR in Spain.

There are positive signs on the horizon for Jamaica’s post-COVID-19 economic outlook as the AMResorts Group has confirmed a 280-room Dreams in Montego Bay and a 700-room Secrets resort in Richmond, St Ann.

The new rooms are among the investments Spanish hoteliers committed to during Tourism Minister Edmund Bartlett’s attendance at FITUR, the first face-to-face global tourism trade show staged since the beginning of the pandemic.

Bartlett, who is travelling with Minister without Portfolio in the Ministry of Economic Growth and Job Creation, Senator Aubyn Hill, told The Gleaner that the discussions with the investors were fruitful.

“We fully secured the 700 room I spoke of in my presentation in Parliament. That property will be in Richmond, St Ann, between Grizzly’s Entertainment Centre and Priory and a 280-room top-end Dreams in Montego Freeport, where Hard Rock Café was,” he stated.

But that was just a tip of the recovery efforts.

Plans to expand the hotels’ reach into Jamaican communities through greater and sustainable supplies to the properties and partnerships in manufacturing, energy and logistics were also discussed.

Meetings were also held with SAMPOL, the group that deals with a lot of the supply side of tourism, Bartlett revealed.

“We are excited about the possibility of that side of tourism because this is where we want to go in the resetting of the sector – to ensure that more of the supplies that the industry needs are sourced in Jamaica, through Jamaican partnerships or Jamaican entities,” the minister told The Gleaner.

The Ministry of Tourism’s Linkages programme that it has been pushing for years, he said, is to be enhanced, in addition to other types of investments.

Depicting the tourism trade show as signal that the sector is back, the Jamaican tourism minister noted that although only about a little over 50,000 people were in attendance at the show over the four days of its staging, it made a bold statement that people are ready to travel again.

An estimated 50 tourism ministers were in attendance at the event, which would normally attract more than 100,000 people pre-COVID.

Bartlett has used the trip to capitalise on tourism-related activities. The minister departed Spain this morning for Saudi Arabia to meet with Ahmed Al-Khateeb, that country’s tourism minister, to concretise bilateral talks that started in Cancún, Mexico, two weeks ago during the World Travel and Tourism Council (WTTC) Conference.

“Ideally, we will look at participation with the Global Resilience Crisis Management Centre being expanded to have a satellite in Riyadh (capital of Saudi Arabia) to examine support for the small and medium tourism enterprises that we are pushing in Jamaica.”

The Saudis have had a strong interest in this area and have negotiated a $100-million World Bank loan that they have structured. The loan is available for small enterprises globally.

Both Jamaican ministers will also meet with the minister of investment and have other bilateral talks with persons from the Kingdom, Bartlett revealed. He is hopeful that out of the arrangements in Saudi Arabia, there will be new investment opportunities for the entire Caribbean.

Invited to serve on the Riyadh Tourism Academy, the minister, who returns to the island this weekend, will also participate in the world’s first major global summit in relation to tourism’s recovery. It comes on the heels of the Inter-American Development Bank (IDB) Caribbean Quarterly Bulletin, which shows that the unprecedented shock to tourism persists as the region faces an equally unfamiliar degree of uncertainty about the timing and pace of the recovery.

The report notes the risk that vaccination programmes could stall in source countries for a variety of reasons.

“There may be an even stronger geographic bias towards domestic – rather than international – travel, as families catch up with relatives in other parts of their home countries. In general, surveys show that traveller preferences have shifted towards the familiar, predictable, and most trusted,” the report said.

On the positive side, the IDB reports states that the main source countries for tourism arrivals are advancing rapidly in vaccinating their populations. Their economies are also recovering. Personal savings are up for many families whose jobs were not affected by the crisis. Stimulus measures in the United States are putting money in the pockets of middle-class families.

“Perceptions of travel are improving, and advanced bookings are increasing. In fact, there may be a combination of pent-up demand and a “champagne effect,” as people feel safe to travel again,” said the 63-page report.