Small farmer laments the ‘marrying’ of chicken and feed 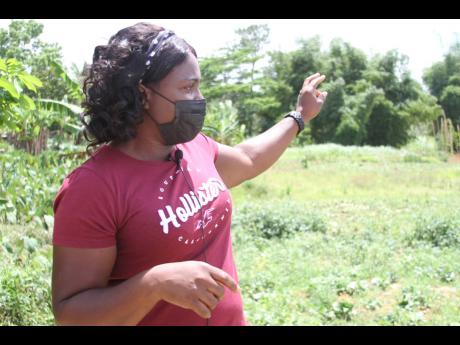 Nathaniel Stewart/Photographer
Denise Williams-Bailey points to the acre of land she obtained from her father in Mason River, Kellits, Clarendon, in 2016 to start farming.

With the price of chicken set to increase for a third time since the start of the year, farm owner Denise Williams-Bailey is bemoaning the effect the increase will have on her already dwindling profit.

Williams-Bailey of Rowe Town in Mason River, Clarendon, owns four farms and is the owner of Denden’s Farm and Supplies.

The 35-year-old farmer said another price increase will only unearth new challenges for farmers who already contend with water woes, which plague many northern Clarendon communities. She also believes enough support is not being afforded to small farmers.

“We want help. I don’t think enough is being done to support small farmers, maybe because we are so small they can’t see us.

“The feeding is going sky high. For the past three weeks, every week chicken feeding raise and if feeding is going up, and the restaurants and wholesalers don’t want to pay the raised prices, it’s hard for us to make a profit,” she said.

Williams-Bailey told The Gleaner that she has had to resort to selling chicken giblets to recoup costs.

“I used to give them away, but because the feeding price is so high, I have to actually sell those stuff to cover all the losses,” she said.

The farmer said the biggest challenge she now faces is what she described as the ‘marrying’ of chicken and feed. She said farmers are forced to buy a certain number of feeds in order to get chickens at local farm stores.

“I went to buy feeding in May Pen, I was told that I have to buy a certain amount of feeding in order to get chicken. We are small farmers and we don’t have money like that, we are trying. I think it’s unfair for them to put it that you have to buy all the feeding one time,” she said.

Councillor for the Kellits division, Noel Nembhard, told The Gleaner he was was not aware of the practice, which he described as unfair.

“I think I’d have to go take it up with my Government and the minister of agriculture and see what they can do about it, because it’s not fair,” he said.

He added that the practice will also pose adverse effects on smaller businesses. “That’s even putting down small business people, too, like the persons who have farm stores. The bigger stores forcing her to buy 40 bags [of feeding, ]so that’s stopping somebody’s sale too.”

Pig and chicken farmer, Jennifer Williams, also lamented the cost of feed. “We would like something to be done about the feeding because the feeding is very expensive,” she shared.

She said, however, the generosity of the councillor who owns a farm store in the area has assisted in offsetting some of the burden, as farmers are often given feeds on credit.

Williams-Bailey said she is hoping the Government will come on board and offer well-needed support.