SOS Logwood | Senior still haunted by the murder of his family 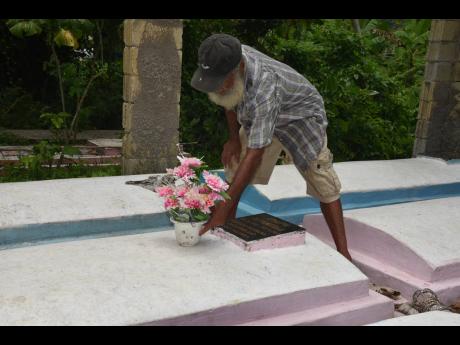 Photo by Mark Titus
Seventy-three-year-old Marvin Bloomfield rearranging the flowers on the grave of his late wife in the community of Logwood in Hanover last week. 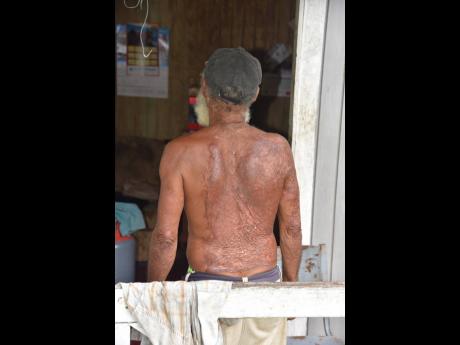 Photo by Mark Titus
Marvin Broomfield shows the scars from that night when he escaped death but lost several members of his family, including his wife, in the community of Logwood in Hanover.
1
2

The screams of his dear wife and members of his family pleading for mercy before they were shot execution style by gangsters, who then set their five-apartment home in Logwood, Hanover, ablaze on that fateful night on October 8, 2015 still ring loud in the head of 73-year-old Marvin Bloomfield.

That night he watched helplessly from another room where he was hiding as the gunmen murdered his wife Lynette, son Mark, daughter Kerian, grandchildren Aliah and Davion Mahabee, and close relative, 29-year-old Brian Mangaroo.

“I felt helpless, I wanted to do something, anything, to stop this, but I was outnumbered,” Bloomfield told The Sunday Gleaner. “They told them to lie face down and even though she was pleading for her life, they still killed her like a dog … and then walked away like nothing.”

He later heard other shots and knew that the others were dead.

From where he was hiding, the perpetrators were heard saying that the house must be torched. He also remembers the sound of the bottle bombs hitting the wooden structure of his house before fire started consuming the building.

Faced with the choice of burning to death or being shot by the murderers, he chose to take his chance with the latter.

Bloomfield described his wife as one of the most kind-hearted human beings in the Logwood/March Town area, who never refused to respond to a cry for help.

“I am still hurting just seeing their graves. Sometimes I cry when I remember the good days that I had with my wife. She was like an angel on earth,” he said, his voice shaking with emotions.

“When me ready, I carry a pillow and a towel that I spread on her grave and lie down on her and talk to her because she was the best thing that ever happened in my life.”

According to Bloomfield, one of the killers was familiar with his home, and would even be fed there.

After the tragedy, he was given a house by Food For The Poor Jamaica, but that cannot replace the joy of his entire family, laughing, crying and even disagreeing together.

“Every turn I turn in the house I think about them, but God gives me the strength to carry on, and I look to Him every day,” he shared.

Giving thanks for his remaining children and grandchildren, the senior Bloomfield has found some comfort in the fact that of the 12 men who took away his loved ones, nine have been killed in gang feud or by the police, another cannot be accounted for and two are in prison with no possibility of parole until after 80 years.

“I still wish I had the chance to give them a decent burial, but even that they took from me,” he lamented.