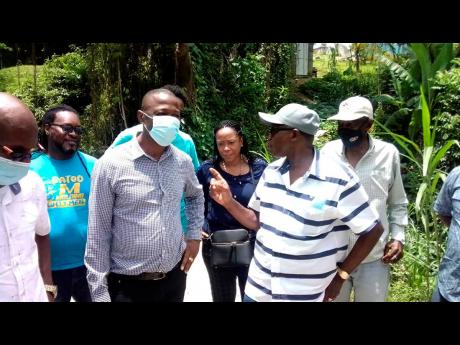 Photo by Hopeton Bucknor
Minister without portfolio in the Ministry of Economic Growth and Job Creation, Everald Warmington (second right), addresses Westmoreland Central Member of Parliament George Wright during a tour of roads in the constituency on Wednesday, June 30. At right is State Minister J.C. Hutchinson.

WESTERN BUREAU: The Holness administration’s pledge to pump millions of dollars into infrastructural development in Westmoreland Central is being viewed as a pre-emptive ploy at stabilising support and blocking the Opposition People’s National...

The Holness administration’s pledge to pump millions of dollars into infrastructural development in Westmoreland Central is being viewed as a pre-emptive ploy at stabilising support and blocking the Opposition People’s National Party from making inroads amid the George Wright assault saga.

That’s the call of analyst Shalman Scott, who said that it would not have escaped the politically discerning “that from day one, the preoccupation of the Jamaica Labour Party (JLP) in Government was to avoid a by-election in Central Westmoreland at all cost”.

Scott believes that it is within the realms of possibility that the JLP cut a deal with Wright to retain the seat and to prevent a by-election.

Wright, a political discard of the Labour Party-cum-independent, was showered in praise last Wednesday by Everald Warmington, minister without portfolio in the Ministry of Economic Growth and Job Creation, who has described him as a “transformational” representative.

During a tour of badly worn roads in the constituency, Warmington said that more than $150 million would be spent to rehabilitate the corridors.

“George Wright is the member of parliament for Central Westmoreland, whether he is an independent, a member of the PNP, JLP, or no P at all,” Warmington told journalists.

“Once a person is elected by the people, that person is recognised as the representative for the people of that constituency.”

Allocations for thoroughfares scheduled for rehabilitation include the Gooden River to Glasgow road ($65.5 million); Shrewsbury to Logwood ($45 million); and Porters Mountain ($30 million) leading into Welcome.

Further works at Shrewsbury and Logwood Bridge may cost $20 million, the minister added.

Wright, a first-time member of parliament (MP) on a JLP ticket, has been stalked by a public scandal after he was accused of being the man seen in an April 6 viral video beating a woman with his fists and a stool. Wright and his partner, Taniesha Singh, had made initial reports to the police but later refused to assist detectives, effectively dooming the case to be closed.

Singh attended last Wednesday’s tour but spent most of her time in a vehicle.

The MP was sidelined by the JLP’s parliamentary caucus and later resigned from the party after outrage from the Opposition, and church, business, and civil-society groups. However, he has not quit Parliament and vowed to support the policies and practices of the ruling party.

It is those machinations, plus Wright’s own revelation that JLP workers were liaisons and on-the-ground aides manning his operations in Westmoreland Central, that give Scott reason to believe the proposed spending spree in the constituency is part of a game.

Besides Wright in 2020, only Callam Josephs (1980) and Russell Hammond (1983) have won the seat for the JLP. The 1983 general election was boycotted by the Opposition.

Warmington, who was accompanied on the tour by State Minister J.C. Hutchinson, said that Wright has lobbied the Government relentlessly for different projects in the constituency.

Wright subsequently told The Gleaner that he was grateful to Warmington and Hutchinson for visiting his constituency and addressing concerns about the state of the roads.

“We would have toured quite a number of roads in the constituency and I am elated to know that the minister himself came and visited with me,” said Wright.

“Most of these roads have been in a deplorable condition for a very long time.”