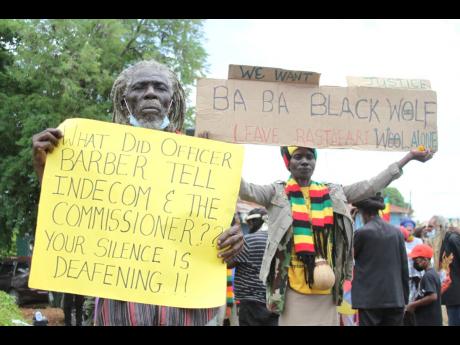 Nathaniel Stewart/Photographer
Members of the Nyabingi Order protest close to the Four Paths Police Station in Clarendon, seeking answers on an alleged case of a police officer trimming the dreadlocks of Rastafarian teen Nzinga King while she was in police custody.

FOUR PATHS, Clarendon: Anthony King, father of 19-year-old Nzinga King, whose dreadlocks were allegedly cut while in custody at the Four Paths Police Station in Clarendon, is adamant that justice must be served in his daughter’s case. King, who...

Anthony King, father of 19-year-old Nzinga King, whose dreadlocks were allegedly cut while in custody at the Four Paths Police Station in Clarendon, is adamant that justice must be served in his daughter’s case.

King, who took a part in a protest opposite the police station yesterday, took issue with the fact that the accused officer had not declared whether she had indeed committed the act in the first 24 hours of being accused.

“You mek 24 hour pass and you don’t declare yourself whether you wrong or you right, you have no talk,” he said in a Gleaner interview yesterday. “All a di ancestor rise now and get mad.”

He dismissed reports that his daughter could have cut her own hair, saying that if she had tried to pull out her dreadlocks, she would have to seek medical attention.

Ras Ivi-Tafari, public relations officer for the Nyabinghi Order globally, also questioned whether Nzinga could have cut her own hair, wondering how she would have got the scissors when she went from the courthouse straight to the station.

“If she had removed it on her own, there should be a police report that say, ‘We brought her in with her locks, but when we went to give her meals she was pulling her locks’. There is no evidence. Them locks yah caan pull from her head just suh without adverse side effects,” he quipped.

He said that the Rastafarian movement has been receiving global support in the matter, which is being probed by the Independent Commission of Investigations (INDECOM) and the Inspectorate and Professional Standards Oversight Bureau.

Yesterday, Rastafarians from across the island turned out for the peaceful protest as they chanted to the beat of the drum, lit fire and prophesied over the situation.

Deputy Superintendent Owen Brown and acting operations officer for the parish of Clarendon acknowledged the peaceful nature of the protest, only expressing concern about possible breaches of the Disaster Risk Management Act as the protesters were not wearing masks.

Brown said he could not speak to the investigation as it was being probed “at the highest level and [he] will allow the hierarchy of the force to speak on that one”.

Giving a preliminary report in a release yesterday, ​INDECOM said that it had interviewed and received written statements from the complainant and her mother and had initiated and arranged with the Victim Services Division to provide counselling to the family.

Inmates at the Four Paths Police Station were interviewed by INDECOM investigators and statements were recorded.

Written statements were provided to INDECOM by the officers who were on-duty at the Four Paths Police Station, to include the sub-officer in charge as well as the police officer specifically implicated in this incident.

INDECOM said that it recovered exhibits from the cell which was occupied by Nzinga and had also conducted interviews with civilians, reportedly with knowledge of the incident.

“The commission will review all the evidence collected; thereafter, the concerned officers will be served Section 21 notices, pursuant to the Independent Commission of Investigations Act, to attend the offices of the commission to be interviewed,” it said as it aims to complete its investigation.

Nzinga King was arrested on June 29 and was taken to court on July 22, where she was charged for disorderly conduct and fined $6,000 or 10 days in jail.