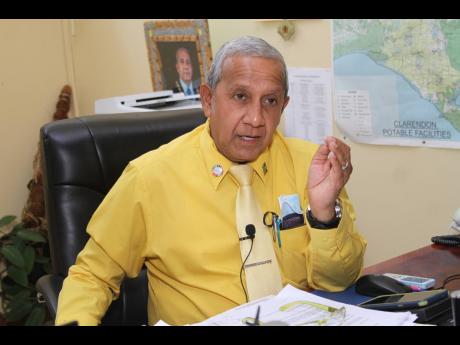 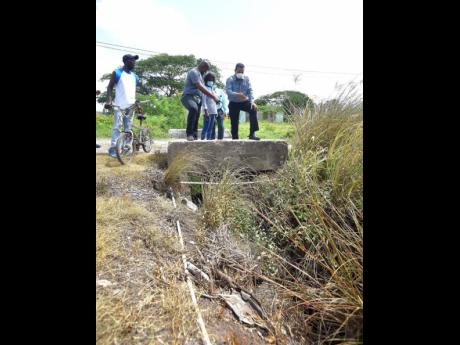 Contributed
Minister of State in the Ministry of Local Government and Rural Development Homer Davis (right), and member of parliament for South-West Clarendon, Lothan Cousins (left), look at a blocked drain in the community of Banks during a tour on July 22. Looking on (from second left are: Councillor for the Racecourse division, Pauline Reynolds, and Mayor of May Pen Winston Maragh.
1
2

Mayor of May Pen Winston Maragh toured several communities in Clarendon on Wednesday as state officials began assessing the toll of Tropical Storm Grace on the parish from a day earlier.

Among the worst affected areas in the parish are Rock River, the entire Rocky Point division, which includes Portland Cottage and Mitchell Town, as well as Kellits, and Salt River Road.

“Because of the amount of rain that fell, there was some flooding out in several homes in Rocky Point, Racecourse, Portland Cottage, Mitchell Town, Hayes and Longwood,” he told The Gleaner.

Arrangements have been made for fallen trees to be cleared from roadways, he said.

“Lime Hall road completely cut off now. No vehicle can go in or come out, they can walk in or out, but that’s it,” she said on Wednesday.

Taylor also shared that the house of a senior citizen in Mount Zion was impacted by a landslide. However, neighbours banded together to help clear the slippage.

The nearby community of Simon did not escape as Taylor informed that landslides occurred at two separate locations.

Taylor said she was also affected by the heavy rains. Mud and debris flowed into her yard because of a blockage to a drain at the back which compromised a chicken coop.

Scean Barnswell, councillor for the Hayes division, expressed concerns about the blocked National Work Agency (NWA) drains along the Hayes main road, in the vicinity of Girls’ Town near the Wembley Centre of Excellence, all the way to Raymonds’ Three Sister Pub.

“I mean these drains are in deplorable conditions and the residents are affected again from another downpour, this time from Tropical Storm Grace. I am appealing once again to the Member of Parliament Pearnel Charles Jr and the NWA to have those drains cleaned now,” he said, adding that it is urgent and life-threatening.

“We cannot afford to allow it to continue as we are still in the hurricane season,” Barnswell stressed.