Traditional rush on for school supplies 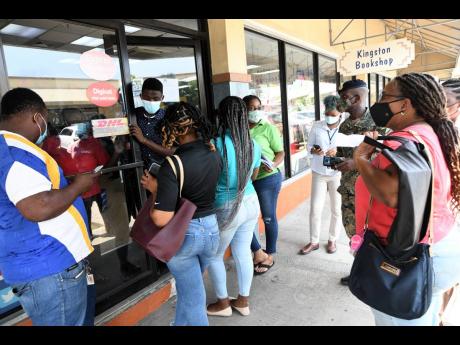 Rudolph Brown
Shoppers wait to get inside Kingston Bookshop in Springs Plaza on Friday.

On Friday when employees were released from work early to give them the opportunity to stock up on food supplies before the mandatory three-day lockdown, many of them instead rushed to bookstores to acquire items that are on their children’s booklists.

With online classes officially starting today, large crowds overwhelmed staff at bookshops in Half-Way Tree, with long lines of persons waiting to enter the stores before they closed. Some of the shoppers questioned whether it was a wise decision to purchase textbooks, due to the uncertainty of when face-to-face classes will resume.

At Bryan’s Book Store, located in the Springs Plaza, a teacher from Grade Start Academy, a preparatory school in St Elizabeth, was among those who wanted to beat the rush in order to get supplies.

“It’s online school, so we have to get our materials so that we can work better from home,” she said, adding that much preparation was necessary in order to effectively follow the curriculum and to adequately attend to students’ learning needs.

Ivalyn Bryan, whose daughter will be taking the Caribbean Secondary Education Certificate examinations next year, said she will be “making one uniform, just in case”. No school shoes yet, she added, as she will be keeping a close eye on reports made by the Ministry of Education regarding the reopening of face-to-face classes. Confessing that her child’s grades were not as good as they could have been, Bryan said this is because of the lack of physical teacher-student interaction in the classroom-learning environment. However, she hopes that better days are ahead this year , anticipating that school will reopen soon so that her daughter’s grades will “pick up”.

Meanwhile, parents at the Sangster’s Bookstore said that regardless of the uncertainty, they will be purchasing all textbooks indicated on the booklists. One customer said she will still be buying the books because she will be helping her son to grasp his lessons, describing herself as “his second teacher”.

A parent who gave her name only as McClarty, said she anticipates that this school year will be “the same as last year”, noting the great challenge of online learning for students and parents. Being a parent who cannot work from home, McClarty said she has to transport her child to a different location to accommodate her online studies. Though she has purchased much of the textbooks for her child, she exclaimed that “the books are very expensive,” with every booklist requiring that parents purchase a laptop or tablet.

Because of this, McClarty said she wishes the Government would assist parents by giving them an incentive, as many families are facing financial burdens brought on by the pandemic.

Jody Ann, a worker at Sangster’s Bookstore, said people are coming out but are still hesitant as to whether textbooks should be bought. “People are buying small amounts ... it’s mostly stationery than textbooks,” she added. The employee informed The Gleaner that she has seen where Primary Exit Profile books are being sold at a faster rate, where “parents are trying to get as much as they can” despite the uncertainties.