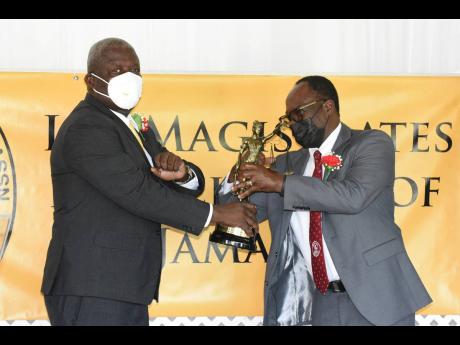 Kenyon Hemans
Dr Lynden Rose (right), president of the Lay-Magistrate Association of Jamaica presents one of the three Golden Scale awards to Rev Florizel Allen during the 25th Annual Golden Scale Awards at the Caymanas Golf Club on August 28. 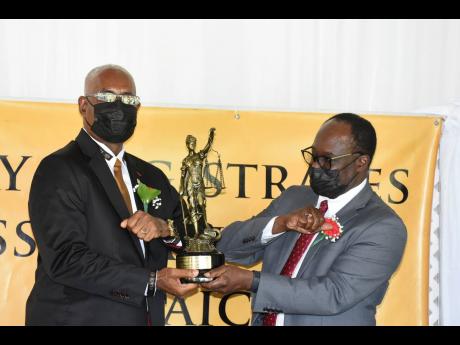 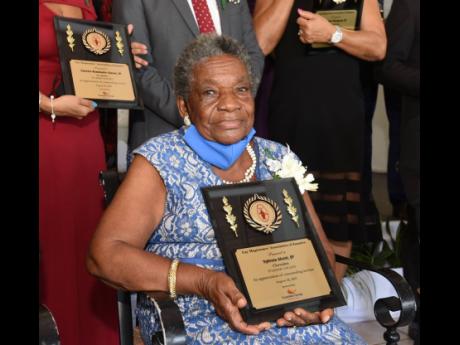 Kenyon Hemans
Justice of the peace since 1984, Sylveta Alcott from Clarendon was award at the 25th Annual Golden Scale Awards at Caymanas Golf Club on August 28.
1
2
3

Three distinguished justices of the peace (JPs) representing Cornwall, Middlesex and Surrey, were among more than a dozen honoured with the Golden Scale Award on August 28.

This year was the 25th staging of the awards.

Deers, a JP for St James since 2009, and who has served as first vice-president and zone chairman for the parish chapter, was the Cornwall recipient. He is a national director.

Allen, commissioned in 2012, is a former chaplain and president of the St Catherine chapter. He was awarded for Middlesex. He is also a national director serving on several committees.

The Surrey awardee was Michael Reid, who was commissioned in 2004. Reid is a former treasurer at the Kingston chapter and has served on several national committees.

Eleven parish awards were issued to JPs from all the parishes, except St Ann, St Andrew, and Westmoreland.

Sylveta Alcott, who was commissioned in 1987 and is the longest-serving JP in Clarendon, was among the parish awardees.

Justice Minister Delroy Chuck, who delivered his remarks virtually, praised the newly developed lay magistrate handbook, which is a guide to the functions and duties of JPs. He committed to enhance training in the procedures of the parish courts.

“One of the areas I am hoping to work with you closely on is for you to have regular sessions with the parish judges and all the lay magistrates who serve in the courts,” Chuck said.

“I think it is important that you improve your interactions with parish court judges and also for them to give you hints on how to improve your service when you are actually at the court,” he added.

The justice minister said that monthly meetings could be conducted with one or two parish judges. Discussions to facilitate this process could be had with Chief Justice Bryan Sykes, he said.

President of the Lay Magistrates Association of Jamaica Dr Lynden Rose said in his message that the organisation, being true to its 2021 theme ‘Being Resilient in the Face of New Challenges’, has had to employ innovative solutions to deal with existential threats caused by the pandemic and crime.

“Lay magistrates and justices of the peace continued to perform their duties without fanfare or emoluments despite the current difficult circumstances,” said Rose.

Formal gatherings have become a rarity for many organisations since the advent of the coronavirus pandemic, but the organisers of the Golden Scale Awards meticulously adhered to coronavirus safety and health regulations at the Caymanas Golf and Country Club in St Catherine.