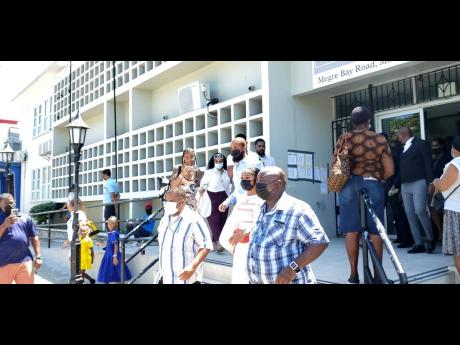 Ashley Anguin/Photographer
Jayda Cheaves (centre) being escorted from the Western Regional Gun Court in Montego Bay, St James, on Wednesday. Cheaves and Gregory Wright, a member of her entourage, were fined a total of $1.6 million on gun-related charges.

WESTERN BUREAU: Attorney-at-law Michael Hemmings has dismissed suggestions that American social media personality Jayda Cheaves got special treatment in having her case swiftly handled by the court on Wednesday after being slapped with gun-related...

Attorney-at-law Michael Hemmings has dismissed suggestions that American social media personality Jayda Cheaves got special treatment in having her case swiftly handled by the court on Wednesday after being slapped with gun-related charges two days earlier.

Hemmings, who was part of the defence team for Cheaves and her co-defendant Gregory Wright, said locals have been brought before the court just as speedily.

Cheaves and Wright, both 24, were fined a combined $1.6 million after pleading guilty before the Western Regional Gun Court to charges of illegal possession of firearms and ammunition. The charges stemmed from the discovery of two 9mm pistols and 15 rounds of ammunition in their luggage while they were boarding a private jet to leave Jamaica from the Sangster International Airport in Montego Bay on Monday.

Cheaves and her entourage had arrived in Jamaica a week earlier to celebrate her 24th birthday.

Following their court appearance, where Cheaves was represented by attorney Martyn Thomas, she and Wright were quickly whisked away by an entourage and left the island the same day.

Social media users have questioned the swift manner in which the case was handled while raising concerns that similar cases involving locals are usually tied up in the courts for extended periods.

However, Hemmings said that Jamaicans can get a swift resolution to their cases under certain conditions, including by submitting an early guilty plea.

“One has to remember that when a person pleads guilty at the first opportunity, he or she is entitled to a 50 per cent discount from the judge on a discretionary basis. When you look at their antecedents (history and record), then you take the mitigating factors into consideration, and it is a balance between the mitigating and aggravating factors that are used to make a determination as to the appropriate sentence,” said Hemmings.

“I have represented persons in Jamaica, who are Jamaican nationals, for firearms offences, and they pay fines. It is not unusual or unprecedented, and I am not the first lawyer to do that, so it is nothing new, and the law provides for it,” the attorney told The Gleaner.

“I will say to critics that they should not find themselves on the wrong side of the law because the very law they are criticising, they are going to want us lawyers to use that very same law to their benefit,” he added.

Fellow western Jamaica-based attorney Henry McCurdy agreed that cases of a similar nature are usually dealt with in a speedy manner.

“Nothing is wrong with that because once persons are charged at the airport, they get bail, and they get the matter dealt with. It happens all the time and people do not know about it, and it is not because of who the persons are,” McCurdy said.