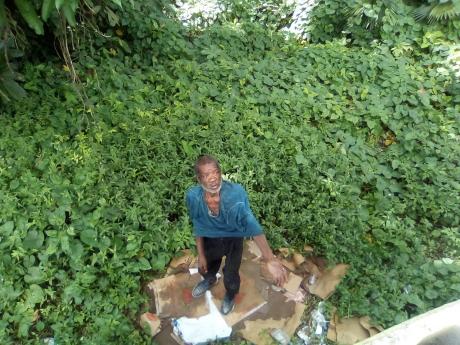 Rasbert Turner
Stafford Malcolm begs for money. He said he used to work in a bank but is now living under a culvert and is in dire need of help. 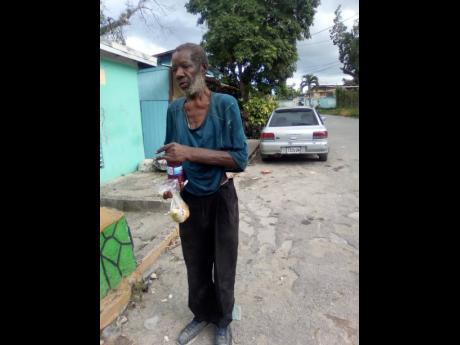 Rasbert Turner
Stafford Malcolm is now begging for food on the streets. 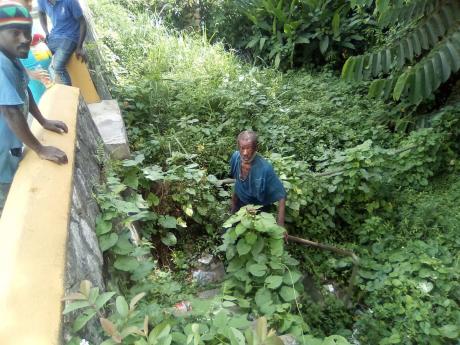 The tattered clothing and the stench that emanated from Stafford Malcolm is a far cry from better days when he was employed to one of Jamaica’s largest commercial banks.

Malcolm now lives under a culvert in the rural township of Glengoffe district in northeast St Catherine and is in dire need of help.

“I worked at the Spanish Town Road branch of National Commercial Bank, I don’t remember how long, but now mi sick and need help. Beg you a $100, please,” he pleaded recently.

The plight of the 59-year-old has been highlighted by concerned resident Alfred ‘Macca’ Thompson.

“Bossy, look over di gully there, that is a sad story. It is a human being that you are looking at, and him usually work at a bank. Now, rain wet him and sun burn him,” Thompson said.

The lone figure of Morgan on soaked cardboard was observed about six feet below the road level, and it took several shouts to awaken him from his slumber.

The news team was told that Morgan isn’t violent and doesn’t give problems, only that he begs to live, in addition to person’s giving him food occasionally.

“I remember him very well, as we were neighbours in Grateful Hill,” Jean Taylor said.

“I remember him used to drive him nice car from work. He didn’t do much talking, but he helped to make the community very proud.”

Having collected enough money to purchase a lunch, Malcolm revealed that he is a father of three children, but couldn’t account for their whereabouts.

Malcolm also disclosed that he is a past student of Oberlin High School, but couldn’t give further details.