Dr Glenda Simms remembered for her work in Canada 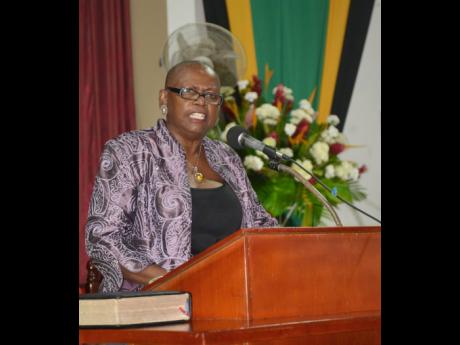 The late well-known feminist Dr Glenda Simms was celebrated for her advocacy for women at a Kwanzaa event in Toronto, just days before she passed away in Ottawa on the last day of 2021.

At ‘Kujichagulia – Ring Your Bell For bell hooks – A tribute to bell hooks’, organised by a Different Booklist Cultural Centre: The People’s Residence, on December 27, Jean Augustine – the first African-Canadian woman to be elected to Canada’s House of Commons as a member of parliament – spoke of Simms being ill and the importance of her work.

Akua Benjamin, a retired professor, former director of the School of Social Work at Ryerson, and activist, said Simms was among the vanguard of black women advocating for social justice in Canada and should be honoured.

These accolades were shared at the virtual event held to celebrate bell hooks, an African-American author, professor, feminist and social activist who passed away on December 15 in Berea, Kentucky, in the United States.

Simms was the president of the Canadian Advisory Council on the Status of Women, 1990 -1996, and upon her return to Jamaica, became the executive director of the country’s Bureau of Women’s Affairs from 1996-2005. She was also the CEO of Simms Consulting in Jamaica. However, before that, she broke new ground in the fight for gender equality and social justice in Canada.

“As a former national president of the CBW (Congress of Black Women), I mourn the passing of our sister Glenda Simms. As a past national president, she showed leadership which guided the formation of the CBW as a truly national organisation. She was an energetic and formidable advocate for the issues affecting black women and their families,” said Augustine.

Augustine says she witnessed Simms’ advocacy as she pushed to ensure that the voices of women from non-governmental organisations were included at the tables of the 1985 UN Conference on the Status of Women in Nairobi, Kenya.

“Dr Glenda Simms was a formidable presence in Canada and Jamaica. I remember hearing her speak on many occasions, including a conference hosted by the National Council of Jamaicans, and was blown away by her passion, boldness and commitment to giving voice to black women and so many others,” says Adaoma Patterson, president of the Jamaican Canadian Association.

“She inspired me and other young black people to own our space, not be afraid to speak out against injustice and work together to make things better for our community. I remember her telling many of us she hoped one day we will become prime minister. Dr Simms has left a remarkable legacy that must not be forgotten and needs to be shared with current and future activists. The Jamaican Canadian Association extends our sincere condolences to her family.”

Simms emigrated to Canada in 1966 to take up a teaching job in Fort Chipewyan, northern Alberta, an isolated area where children had never seen a black person and did not speak English. She knew very little about the culture of Indigenous peoples, but as someone who grew up in Malvern, St Elizabeth, she could relate to their economic circumstances.

A graduate of Bethlehem Teachers’ College, Simms became an associate professor in the Faculty of Education at Nippissing University College of North Bay, Ontario. In 1972, she received her BEd and in 1976 her MEd from the University of Alberta. Between 1977 and 1980, she was an assistant professor at the University of Lethbridge, teaching educational psychology and native education. For five years, she was head of the Indian Education Department at the Saskatchewan Indian Federated College of the University of Regina.

From 1982 to 1987, she was the president of the Congress of Black Women. A founding member of the Afro-Caribbean Association, she was also a member of the Women’s Advisory Committee on Affirmative Action to the Treasury Board of Canada; a member of Phi Delta Kappa; a board member of the National Organization of Immigrants and Visible Minority Women; and a member of the Psychologists Association of Alberta, among others.

Simms was the recipient of several awards, including the Black Achievement Award for her contribution to public policy, and was the holder of honorary doctorates from the University of Alberta, Queen’s University, and the University of Manitoba.

In 2014, she received the Order of Distinction from the Government of Jamaica for outstanding work in gender development.