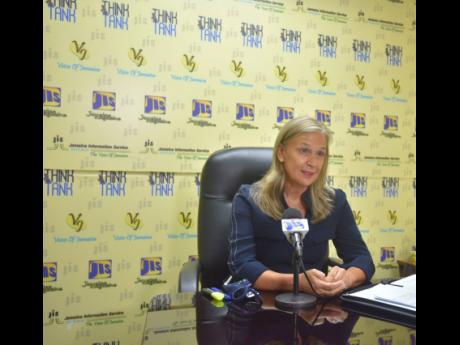 HEAD OF the European Union (EU) delegation to Jamaica and Belize, Ambassador Marianne Van Steen, says that despite many improvements in policies, practices and service delivery within the Jamaican justice sector, assisted by the EU mission, lasting peace and security are still eluding many persons across the country.

As she addressed a Ministry of Justice virtual sensitisation and training session for justices of the peace islandwide, held on Wednesday, Van Steen added that the EU mission has taken note of the increase in the many acts of violence in recent months, describing the situation as “very regrettable”. Over 700 justices of the peace and several custodes were in attendance.

“Recent acts of crime have shown that there are still too many who think that they should, or they can take justice in their own hands,” she argued, noting that the onus is on the justices of the peace across the island to break the subculture of revenge.

She made the comments against the background of the EU delegation funding a number of programmes within the Ministry of Justice over the last six years, with a view to reforming the justice sector.

Arguing that the delegation, along with the Ministry of Justice, have worked very hard to change a lot of shortcomings that were present in the justice system, she added that she is actually quite pleased with what she has seen with regards to the number of improvements that have taken place over the years.

The efficiency and accountability of the justice system, through a significant reduction of the backlog of cases in the parish courts islandwide, the increase in the availability of legal aid to persons in need, along with the addition of three family courts within the system, were mentioned as high points within the collaboration between the Jamaican Government and the EU.

More recently, the establishment of 12 justice centres across the island and the mainstreaming of child-diversion measures within the justice sector, were also highlighted as key achievements within the collaborative programme.

“However, despite all these improvements in policies, practices and service delivery within the justice sector, we also have seen that lasting peace and citizen security is still eluding many persons, and we do indeed have noted increases in acts of violence, especially in the last recent months,” she stated.

She invited the JPs across the country to play their part and make an effort to break the crime subculture present in the country.

She expressed the view that the closeness of the JPs to the situation at the community level presents a grand opportunity for them to educate the populace about the many programmes available within the Ministry of Justice, which are designed to help them solve their daily conflicts.

“I very much would like to invite you (JPs) to do so. Many persons still do not know their rights under the law and also they do not realise that even those rights must be bound by individual and social responsibilities they have themselves,” she noted.

“So, my invitation to you is to continue to contribute to the improvement of each community you serve, by taking justice to the people. I truly believe that the cascading effects of your efforts, your integrity and your acts of impartiality, can shape the landscape for the people you serve,” she emphasised.