‘Students looked up to him’ 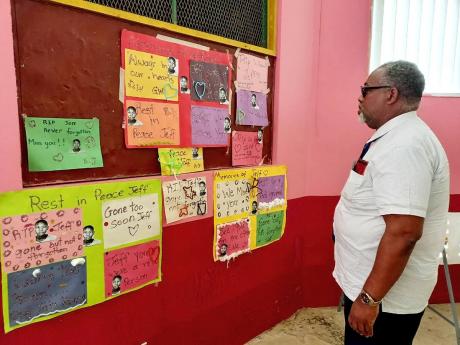 Contributed Richard Thompson, principal of Spot Valley High in St James, looks at the many tributes classmates paid to 12-year-old Jeffery Fitzgerald, who was killed in a motor vehicle accident on his was to school on the morning of February 21.

When Jeffery Fitzgerald did not arrive at school by 7:30 a.m. on Monday, February 21, classmates of his grade-seven class at Spot Valley High School in St James could tell that something was wrong, because the 12-year-old Lilliput resident was always one of the first to sign in online and was never late for school.

Jeffery and his fellow seventh- graders were restricted to online classes for the first few weeks at their new school and had just begun to interact in the physical space, but he had already established a reputation of one who took pride in arriving at school on time.

But with the full resumption of full face-to-face classes starting tomorrow, Jeffrey’s seat will be empty. The youngster was hit by a motor car and killed on the morning of February 21 while on his way to school.

“He was a bright young lad, who was always on time and when one of his friends did not see him at school after seven, he just started crying,” Richard Thompson, principal of Spot Valley High, told The Sunday Gleaner last week. “It was a very sad moment, but what I know is that students looked up to him.”

Jeffery was on his way to school when he was struck by a Nissan AD Wagon that operates as a public passenger vehicle. Reports are that he was attempting to cross the road when he was hit by the oncoming vehicle.

Principal Thompson was unwilling to speak on Spot Valley’s readiness for full face-to-face classes tomorrow, but admitted that most of his 1,080 students would be happy for the resumption.

“Online was very rough for my students,” he said. “The parents for my students mostly work in the hotel sector and jobs like that, so they can hardly afford the credit for online classes, so for the students, this is school.”

The health department has reportedly relaxed the social distancing protocols to three feet apart, but that is still insufficient for Thompson and his team.

Prime Minister Andrew Holness announced the full resumption of face-to-face schooling after the midterm holidays during the ceremonial opening of Parliament last month.

He said that the low health risk of the COVID-19 virus to children and observations of staggering levels of learning loss tipped the scale for the Government’s decision.

According to Linvern Wright, President of the Jamaica Association of Principals of Secondary Schools, while some facilities are not fully prepared, he is confident that all the issues affecting some schools will be fixed by the second week of full face to face.

“I don’t think everybody will be ready but we are going to be okay,” Wright said. “The people who are having the greatest challenges are the schools with huge populations.”

“One of the issues plaguing the return of full face to face is the high volume of rusty chairs that principals are now rushing to repair to meet the reopening of physical school.”

Wright also noted that the education ministry is to meet with schools that are still operating on the shift system.