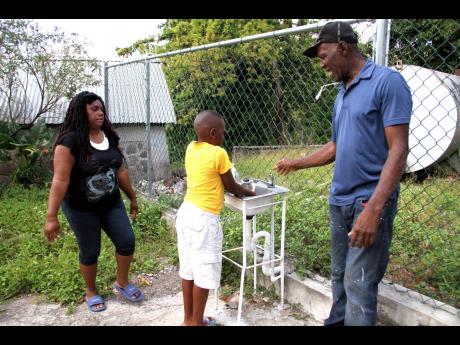 Residents of Red Hills in Clarendon are now rejoicing at the fact that they have water running through their pipes after years of waiting.

Thanks to American James Neumann, who invested $2 million to harvest water from the Bull Head Mountain to the various homes in Red Hills and his own, some distance away in Bryan’s Hill.

Devon-Lee Gordon and Avery Roberts, two of the beneficiaries of the project, expressed gratitude to Newman as they said before life was very uncomfortable and they also had to spend a significant amount of money to get water.

“Life was very difficult for us because some of the times we have to go by Redlands, which is the neighbouring district, to carry water on our heads. Sometimes we had to buy water and if you don’t have money we don’t have water,” Roberts shared with The Gleaner.

She also notes that people in the community who engage in farming sometimes had the challenge of having adequate supply to water their products.

“It was very difficult, we had life hard, very hard, so we buy water, sometimes if persons cannot fill a tank, they just fill a drum so we buy according to how we can afford it,” she shared.

With the price for water ranging from $300 for a full barrel to $4,000 for the black tanks, she said it put an additional strain on them.

Now, thanks to the investment of the American, they are rejoicing that the challenges are now behind them.

Gordon, in praising their benefactor, said he also respects the fact that he issued the instruction that the first priority in receiving the water should be the Red Hills Primary School.

“He has a passion for us and I really appreciate him for that. He also instructed us not to leave out anyone,” Gordon said.

Gordon, in explaining the arrangement, said the only stipulation made by Neumann for connection to the pipes is for residents to pay $1,000 every six months, money he said would go towards the maintenance of the projects.

“If we get a burst and lose a length of the pipe on the main pipe, we can buy it back. Tangit whatever we need,” he notes.

Neumann, who still makes the trek between his homeland and Jamaica, shared that water has been a challenge for him for about 30 years.

After coming to Jamaica in 1974 to teach mathematics at Clarendon College, he “found a lovely piece of land in Bryan’s Hill” and built his house there.

He recalls his years in the 1980s there bathing in the river and carrying water from Pumpkin (a nearby community) by donkey.

“I had no water for 30 years, and two years ago I was talking to old friends and the question was asked if we could not make our own water system,” he shared.

Neumann said that proved to be the catalyst in him actively doing everything to make it happen – buying over 600 lengths of pressure pipes.