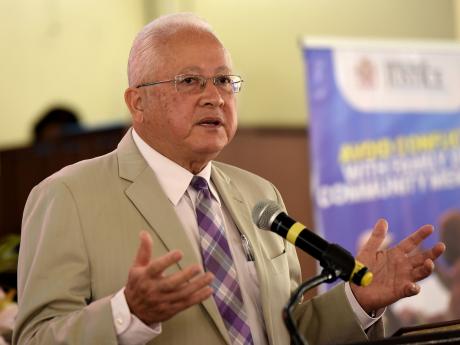 The justice minister said that the courts are overburdened at all levels.

Minister of Justice, Delroy Chuck, said the increased use of alternative dispute resolution (ADR) methods will resolve conflicts more peacefully and assist in reducing the number of cases that come before the courts.

Minister Chuck was speaking at the launch of an ADR services public education campaign at the ministry's headquarters in St. Andrew today.

Approximately $100 million is being provided through the Ministry of Finance and the Public Service to fund the campaign, which will also include restorative justice, child diversion, meditation, and victim support services.

The justice minister said that the courts are overburdened at all levels.

He noted that in the parish courts, the success rate of the 5.45 per cent of cases referred to ADR is 61.5 per cent.

“In the Supreme Court, all civil cases go to mediation. The success rate is 38 per cent. The Dispute Resolution Foundation (DRF) and I are in consultation because we want to improve that success rate and we want more cases to be completed either by mediation or by arbitration,” he said.

Meanwhile, Minister Chuck said the public education programme “is about taking justice to the people” and will sensitise and inform Jamaicans about ADR services.

He added that it will also allow citizens to access these services wherever they are needed.

“In truth, we have success mechanisms to deal with conflicts, and where the Ministry of Justice will be going is to explain and tell Jamaica these success stories,” he said.

Minister Chuck urged Jamaicans to utilise the services of ADR to resolve and settle their disagreements peacefully.