Police to turn up heat on scammers 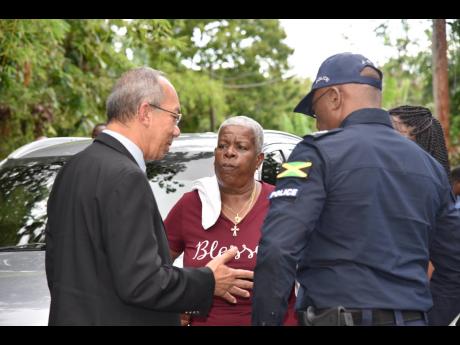 Herbert McKenis
Minister of National Security Dr Horace Chang (left) and Assistant Commissioner for the Area One police division, Clifford Chambers (right) offer words of comfort on Saturday, April 23, to Merl Lewis, grandmother of Tavares Stevens, who was shot and killed in a drive-by shooting incident on April 20.

HEAD OF the Jamaica Constabulary Force Area One Division, Assistant Commissioner of Police Clifford Chambers, says that persons involved in the illicit lottery scamming trade can expect to face intense heat in the coming weeks as the Government moves to eradicate the deadly scars on the country.

The lottery scam, or advance-fee fraud, is estimated to illegally rake in over US$300 million to the Jamaican economy annually.

According to Chambers, this new round of assault by security forces on the illegal activity will result in more than arrests and prosecution. There will also be a heavy and concentrated focus on relieving the culprits of assets acquired from scamming.

He said the Lottery Scam Task Force is actively working with the Major Organised Crime and Anti-Corruption Agency and specialised teams in the police divisions of Trelawny, St James, Hanover, and Westmoreland. Those efforts, Chamber noted, will be bolstered by the Joint Task Force, whose mandate also includes the disruption of lottery scamming activities.

“In another week or so, there will be a lot of operations targeting scammers and there is also the trickle-off-impact of those as well. We are going after their assets,” said ACP Chambers in an interview with reporters in Hanover.

He said a major player was arrested in Westmoreland last week and that several other police divisions have been making progress to rein in the fraudsters.

The lottery scam came to public attention in 2006 after young men in Granville, St James, started raking in big bucks by convincing mostly elderly Americans that they had won a lottery but had to pay a processing fee to have the prize money released.

Within months, persons in other communities joined the act, and before long, several young men throughout St James, Westmoreland, Hanover, and Trelawny, without legitimate sources of income, were lighting up the social circuit, driving high-end vehicles and building mansions.

As the number of players increased in the lottery scam, communities throughout the western region were transformed into killing fields as competition for loot turned into deadly rivalry, involving the notorious Stone Crusher Gang, which demanded a percentage from each scammer or certain death. These actions have contributed to western Jamaica becoming the most murderous region in the country over the past 15 years.

“I see a few judges taking the sentencing regime a little bit different with these characters. I appreciate that it is their discretion, but I think their sensitivity to the challenge is increasing,” Chang said.

He also reiterated the vast challenges faced by the police as those involved in scamming are no longer operating in urban areas, but migrating to deep rural areas across the island.

Outside of the traffic in downtown Montego Bay, the national security minister argued that it is now a safe place to commute.

“But when you hear of Warsop, Waite-a-Bit, Troy (Trelawny), Adelphi, Chelsea, Cambridge, and Copperwood (St James), these are all deep rural areas, and we know it’s because lotto scammers have found their way there,” Chang noted.

He said the security forces are working to prosecute migrating criminals and that the Government is committed to giving them more resources this year because the fight against this particular crime “requires more human and technical resources for them to be able to deal with the thing, which is part of the whole emerging cyber activities that is the real threat”.

When pressed as to whether security forces will be able to keep up with criminals in light of the Government’s plan in developing the technological footprint of the country, Chang said the Government will not allow criminals to disrupt its drive towards economic growth and prosperity.

“We have to move in that direction, and we are going there with the broadband services we are about to offer across the island in getting into our schools and so forth. We have to prepare our security forces for it. That’s what we are doing now because that is where the threat is moving,” he stated.