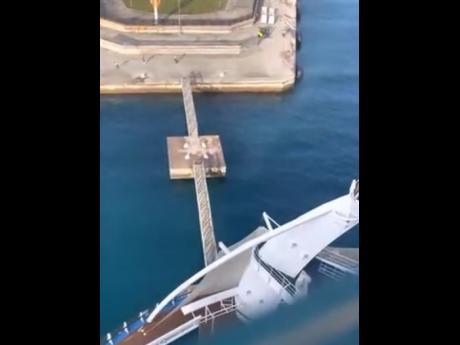 A screen grab from an amateur video posted to social media, reportedly showing the moment when the ‘Harmony of the Seas’ crashed into the Historic Falmouth cruise pier on May 26, 2022.

Opposition Spokesperson on Tourism, Senator Janice Allen says portfolio minister Edmund Bartlett should have kept his mouth shut on the alleged cause of an incident at the Falmouth port involving a cruise ship because he's "no expert in such matters".

Bartlett has said last Thursday's crash of the Royal Caribbean Harmony of the Seas vessel into the dock at the Trelawny facility was caused by 'pilot error'.

Hours after, and without naming Bartlett, the Port Authority of Jamaica (PAJ) issued a statement, cautioning "all parties" against speculation as an investigation was incomplete and comments.

In a response today, Senator Allen said Bartlett's comments were "presumptive and unnecessary" and that the minister "should exercise patience and allow the authorities to investigate the accident and render their findings".

“This is not the time to whitewash and cast blame prematurely for PR purposes or to create a false sense of comfort without knowing the real cause of the accident,” she stated, arguing that unfounded allegations could complicate the investigative process.

Allen said she's confident that the local authorities and the management of the cruise liner will conduct a thorough investigation to determine what transpired and make those findings public.

“I am calling on the relevant authorities to move post-haste with their investigation and findings,” Senator Allen appealed.

The PAJ says it is following the Pilotage Act, which outlines how the investigation should be approached. It includes appointing an investigator and getting a report from the ship's pilot.

Based on the investigator's report, the PAJ may opt for a formal enquiry.

The PAJ says a mooring dolphin, a structure that helps to secure ships in the port, was displaced and will require reconstruction.

The cruise ship's journey was not disrupted.