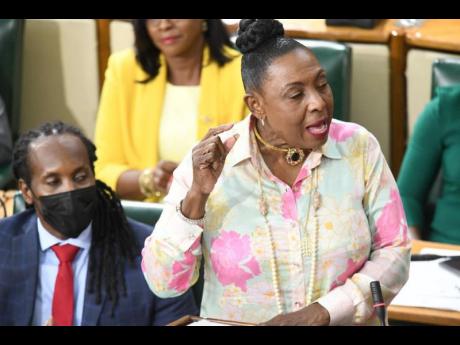 Grange: "I offer a sincere apology to the young athletes affected by this unfortunate set of circumstances for which there must be consequences". Rudolf Brown photo

The board of the Jamaica Anti-Doping Commission (JADCO) has survived calls for its sacking over a testing bungling that thwarted the validation of a relay world record by a Jamaican junior squad.

"I offer a sincere apology to the young athletes affected by this unfortunate set of circumstances for which there must be consequences," Sports Minister Olivia 'Babsy' Grange told Parliament today.

She says the Alexander Williams-led board will be pursuing disciplinary action surrounding the failures at JADCO.

World Athletics, the governing body for track and field, did not ratify Jamaica's 42.58 seconds clocking by the 4x100 metres Under-20 girls at the Carifta Games in April in Kingston.

That's because JADCO did not test Tina Clayton, one of the four runners, because of a practice it has not to test athletes twice in 24 hours, contrary to global standards.

Grange told the House of Representatives that a JADCO investigation found that the technical staff was not sufficiently knowledgeable of World Athletics' rules and applied their won best practice.

“The chairman has reported that checks have revealed that this best practice is not contained in the JADCO rules, the International Standard for Testing, the WADA (World Anti-Doping Agency) rules, and is not contained in any internal memorandum or document. It appears that it was an instruction originating, at least, from the time of the previous executive director,” the minister explained while making her contribution to the Sectoral Debate.

Grange said JADCO applied its intended practice even beyond instructions from the Jamaica Athletics Administrative Association - that is to provide six tests per day with testing being done on any athlete who achieves a national or world record.

The minister said a disciplinary sub-committee of the JADCO board is being established to take “appropriate action”.

There will also be a compulsory re-training of all technical services staff on the rules of competition governing the major sporting organisations.

JADCO chairman, Alexander Williams has apologised and said the agency was at fault.

Former JADCO executive director Renee Anne Shirley has called for the sacking of the JADCO over the issue.

The other members of the quartet were Serena Cole, Tia Clayton and Brianna Lyston.

The previous Under-20 world record of 42.94 still belongs to Jamaica, set by the team of Cole, Tina, Tia and Kerrica Hill, which was set last year at the World Under-20 championships in Nairobi, Kenya.