UWI to partner with US universities on study abroad programmes 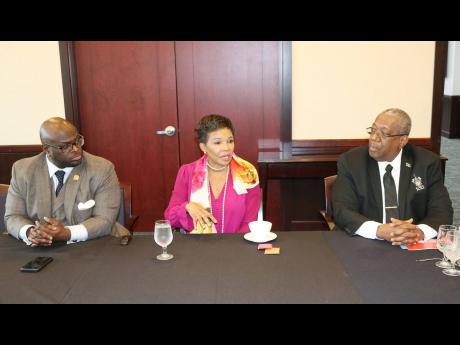 WASHINGTON DC: Students of The University of the West Indies, Mona campus could soon benefit from a partnership with United States-based universities that would see them participating in study-abroad exchange and research programmes.

The framework for the collaboration between The University of the West Indies and several Historically Black Universities and Colleges (HBCUs) in Washington, DC, Maryland and Delaware was laid following a series of meetings organised by Jamaica’s ambassador to the United States, Audrey Marks.

Professor Dale Webber, pro vice-chancellor and principal of University of the West Indies (Mona) visited several universities in the USA to explore the expanded collaboration in research and exchange programs.

He placed a particular focus on a group of HBCUs in the United States to start the process of creating opportunities for Jamaican students attending the UWI to incorporate a study aboard experience in the USA.

The arrangement will entail the creation of exchange programmes for students at UWI Mona and students attending HBCUs to have reciprocal stays of a semester, a year or two years at the participating universities while completing their degree programmes.

Ambassador Marks said she was very pleased that the HBCUs had accepted her invitation to have a direct conversation with The UWI, Mona given the important role that HBCUs continue to play in educating members of the Jamaican diaspora in the United States. “We strongly believe that we have so much more similarities than differences between The University of the West Indies and the HBCUs but to date we have not fully organized ourselves to utilize these similarities to build strengths.”

“It is important that African American students can travel to Jamaica or the Caribbean, not only to get a degree, but to broaden their education experience and world view, where they are not constrained by being a minority.

Once people have had the exposure and see that they can be anything they want, they are seeing themselves in a larger context where it changes their mindset to want to do much more.

“It’s also very important for The UWI to have more exchanges where we give our young people an opportunity to go abroad for even a semester or a year and get that different experience; they come back transformed not only for themselves, but also for their families, their communities and the wider country,” Ambassador Marks observed.

Professor Dale Webber, along with UWI Campus Registrar Dr. Donovan Stanberry; and bursar, Catherine Park-Thwaites, met with top level officials of the HBSUs to work out the details of the proposed collaboration.

Chairman of US President Joe Biden’s Board of Advisers on Historically Black Colleges and Universities, Dr. Tony Allen, said, “There are strategic interests between the West Indies, Jamaica, and black America as it relates to how we educate our children. To be able to connect the broader HBCUs to what is effectively the sixth region of the African diaspora, is important to us. That is why relationships like the one we are building with The UWI here with Delaware state will be equally valuable, and, if done well, will serve as a model for other HBCUs around the country.”

The Biden-Harris administration has committed more than $5.8 billion in support for HBCUs through the American Rescue Plan.

He said, in short order his international affairs department will be visiting Jamaica early next month with a view to finalising the discussion which will result in the signing of a memorandum of understanding. He described the meeting with the Jamaican delegation and the ambassador as very fruitful and a strong beginning that will be very prosperous and beneficial to both universities.

HBCUs are higher education institutions within the United States that were originally established with a mandate of providing higher education opportunities to African-American students. This was done in the 19th century to offset the historical injustices of slavery, and later segregation and their resulting impact on education within the black community.