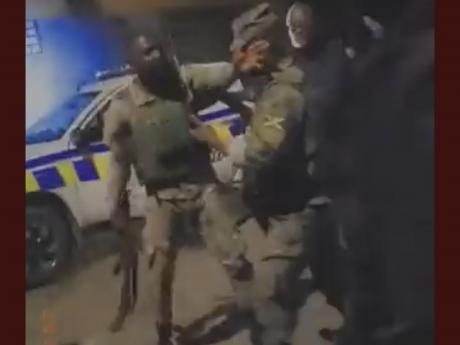 A screengrab from a video in which a soldier (seen with a rifle and pointing fingers) is being restrained by police and military personnel during an altercation with a resident in Parade Gardens in Kingston on June 28, 2022.

The Jamaica Defence Force (JDF) is reporting that an investigation has been launched into the confrontation involving a soldier and a resident in the Parade Gardens community in Kingston on Tuesday.

The incident was captured on video.

The viral footage shows the soldier and the resident exchanging blows during the altercation.

The vigour of the army man's punches caused the crowd that gathered to exclaim in shock.

The soldier was pulled away by a colleague.

After getting loose, he removed his helmet and then ran back while swinging his rifle.

Army and police personnel had to intervene, who pulled the visibly upset soldier away.

He tried to return to the scene and had to be restrained by the personnel and was physically escorted away.

In the video, the personnel were seen pleading with the soldier to calm down.

The JDF described the incident as disturbing.

Chief of Defence Staff Admiral Wemyss Gorman, in a statement, said that she expects the highest standards of good order and military discipline from all servicemembers.

She added that any allegation of misconduct is frowned upon and is subject to investigation, administrative action and disciplinary proceedings, where necessary.

She further indicated that if the investigation uncovers that any servicemember involved committed any offence under the Defence Act or breached any Force Policy or Operational Orders, the necessary sanctions will be applied forthwith.

The army head emphasised that the JDF continues to support the Jamaica Constabulary Force and all law-abiding citizens in working to reduce crime and violence and for the creation of a safer Jamaica for us all.