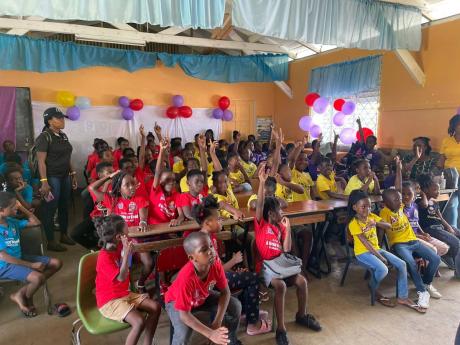 Contributed
Several of the young participants who took part in a recent summer camp, held by the Jamaica Constabulary Force and the Jamaica Social Investment Fund, gather at the Salt Spring Primary and Infant School in St James, where the camp was held. 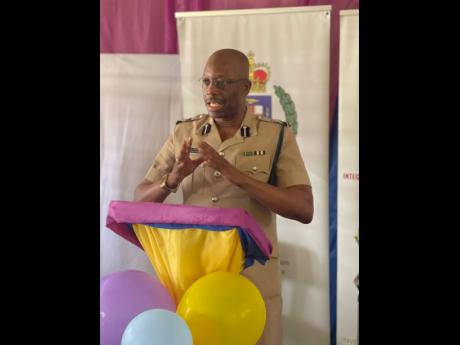 Contributed
Assistant Commissioner of Police in charge of the Area One Police Division, Clifford Chambers, addressing the closing session on August 19 of a summer camp held for children in Salt Spring and adjoining communities.
1
2

OVER 100 children from Salt Spring and neighbouring communities in St James have benefited from the social interaction and educational opportunities gleaned during a recent summer camp held by the Jamaica Constabulary Force (JCF) and the Jamaica Social Investment Fund (JSIF), which climaxed on Friday, August 19.

The programme, which was implemented at a cost of $800,000, saw 117 campers between the ages of six and 17 engaging in art and craft sessions, lessons in dispute and conflict resolution, etiquette training, health and wellness workshops, road safety instruction, and English and mathematics classes over a four-week period on the grounds of the Salt Spring Primary and Infant School.

Members of the JCF were on hand to engage the campers and other community members during the camp’s duration, as the primary goal of the programme was to strengthen the relationship between the residents of Salt Spring and the police, as well as to nurture the participants’ personal development.

In addressing the camp’s participants during Friday’s closing session, Assistant Commissioner of Police in charge of the Area One Police Division, Clifford Chambers, urged the children to apply the lessons they had been taught, so as to become model citizens of Salt Spring and the wider Jamaica.

“We want you to be model children, modelling your home, your school, and your community, so that at the end of it all, we will know that we have model students who will grow to become something great from the Salt Spring community,” Chambers added.

That sentiment was echoed by Senior Superintendent of Police for St James, Vernon Ellis, who lauded the residents for the support they gave to the camp during its tenure.

“To the parents and other members of the Salt Spring community, we thank you for the partnership you have given. Students, I ask that you continue with some of the things we have taught you during the training programme here at the camp. We ask that you keep up the good work, because we want to see you grow into being good citizens of this parish,” said Ellis.

The summer camp, which was held under the JSIF’s Integrated Community Development Project Phase 2, was aimed at addressing the effects of learning loss and lack of positive socialisation as a result of the COVID-19 pandemic. The camp also sought to tackle concerns of children’s public safety during the summer due to the lack of supervision for them.

Norma Brydson, the principal of Salt Spring Primary and Infant School, expressed gratitude for the opportunity to host the camp on her institution’s grounds.