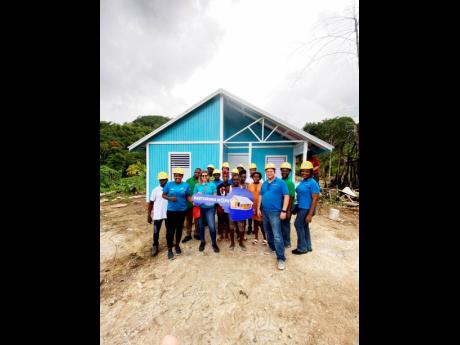 Twelve years ago, Dean Morris’ world was ripped apart after when her eldest child, Shadae Barker, was murdered by her spouse, Ken Brissett.

Soon after Barker was found dead, Brissett was found hanging in the St James community in which they resided.

The March 24, 2010 tragedy caused Morris to suffer from clinical depression and left her with the responsibility of caring for her two young granddaughters, one age three and the other just a few months old at the time.

Morris, mother of six, had been hoping that Barker would have helped to lift her out of poverty, but instead, her tragic death brought more emotional, financial, and other burdens.

“After I lost my daughter, life was rough. Actually, she never had it to help me like that, but because she had her two kids dem to take care of, she push out just like how me woulda push out fi my own dem,” Morris told The Gleaner.

“So after I lose her now, it was rough and tough for me. Mi did lose every weight. Mi stress out. It’s like mi never in a myself,” she said.

“Dem did tek away di big daughter. Dem seh how dem a go bring her fi come look for me and so on, but they never bring her back to come and look for me, so mi did affi tek it up in hand and tek it up in my own and go down her school to find her. That’s how mi get to find her,” Morris explained.

Based on conversations with the child, Morris believed the older girl was being abused and decided to take them back, even though it would mean having seven children living in her dilapidated house.

“When I saw her, she was not in a good condition. ... She was stressed out, she said, adding that it did not seem as if the girls were being adequately cared for.

Despite the tough challenges, Morris – who was born and raised in Springfield in Welcome Hall, St James, where she also grew her children and still resides – never gave up.

She took on odd jobs in Montego Bay over the years to care for the family until her elder children went to live on their own, leaving her with her youngest child and the two grandchildren.

“Mi always go out and work – do domestic work and so on to support them – but when I go out deh and work, it wasn’t easy because di fare alone take back everything, but I still push out and mek dem comfortable and try to find food fi dem eat,” she said.

Morris told The Gleaner that she had to scale back with doing domestic work around three years ago because of ill health.

One of her nieces, who could not bear to see their living conditions, offered Morris and the three girls a one-room board house perched on a hillside to live in.

“Di bed dem was not enough for them, so my daughter and granddaughter dem would sleep on one bed. Sometimes dem will sleep with me, but it’s not in a good condition ... . Enough space is not in there or nothing, but mi did thankful and grateful for it because it better than mi outside” she told The Gleaner.

With the onset of the pandemic and work becoming more difficult to find, Morris said that the current times are now even more rough than when her daughter had just died.

After making a plea to Food For The Poor Jamaica, Morris received a new house, through donor Chas E. Ramson, as part of the latter’s 100th anniversary giving-back initiative on July 28.

Morris, who is extremely grateful for the gesture, even helped to dig and cast the foundation and cook for the construction workers.

Her next move is to sew cushions and pillows for sale.

Morris said that the three girls now in her care are doing well in school and she continues to remind them that “education is the route, not only to success, but to get out of the poverty cycle”.