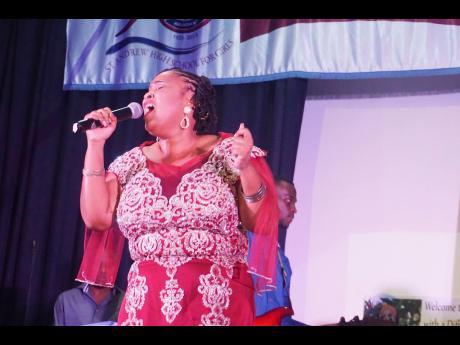 Isaacs, who was born blind, was educated at the Salvation Army School for the Blind and Wolmer's Girls' High School. - File photo

"My reason for entering the contest is to empower women and girls to become the best version of themselves, despite their challenges," Isaacs said Tuesday .

The pageant is hosted annually by Eyes Like Mine Inc and  Isaacs is the sole person from the Caribbean to enter the competition this year.

The pageant begins on September 30 and ends on October 1 and aims to empower women with vision loss by providing tools to help with their daily life.

Isaacs is asking individuals to help her to win by voting for her between now and Friday by going to her Youtube page, Kimiela ‘Candy’ Isaacs, and liking her video titled 'Kimiela Candy Isaacs@ Eyes Like Mine Inc'.

Isaacs created history in 2012 by becoming the first visually-impaired student in Jamaica to obtain a music degree.  She attained a bachelor's degree in jazz and popular music studies from the Edna Manley College of the Visual and Performing Arts and received the Pamela O Gorman trophy for being the most outstanding music student for that year.

She is the founder and director of Sweet Sounds, a group of dynamic young singers who have earned various medals at the Jamaica Cultural Development Commission (JCDC) festival competitions. The group, since March 2020, has won 22 gold medals, 12 silver and six bronze medals.

Isaacs, who was born blind, was educated at the Salvation Army School for the Blind and Wolmer's Girls' High School.  In 2009, she placed second in the JCDC Gospel Song Competition and has won many other awards as a performer and composer. Last year Isaacs was a finalist in the Jamaica Festival Song competition with the song entitled Birthday Bash JA.

She is a strong believer in giving back to society and Isaacs is noted for sharing her knowledge at her former high school and has also taught at various basic and primary schools.

Last year, Jamaican entrepreneur and motivational speaker Tonika Williams was the only contestant from the Caribbean to enter the pageant.