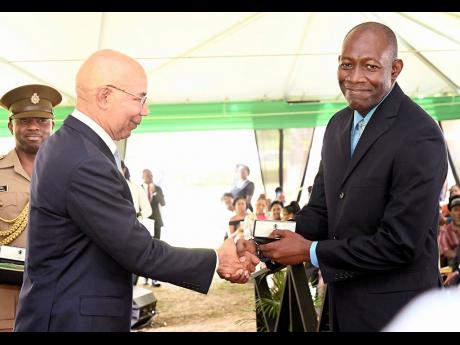 Civil servant O’Neil Hamilton is encouraging more youngsters to see the value in volunteering their time and service over the allure of getting rich quickly especially through illegal means.

In fact, he recalled that it was through volunteering that he would later secure employment to his current position, a job he has held for the past 15 years.

On Wednesday, Hamilton was among some 600 civil servants who were recognised at the Jamaica Civil Service long-service-award ceremony held on the lawns of King’s House.

Hamilton said he was initially assigned in 2007 as a temporary worker, clocking in on a daily basis for weeks without receiving a stipend. He would later be promoted to the position of records and inventory officer in the office of the governor-general.

“I guess persons saw the potential ... and they liked what they saw and an offer was made and I accepted,” he said.

He said volunteering should be taken more seriously and viewed as important as any other job where one can obtain work experience and face challenges that will help to mould individuals into becoming upstanding citizens.

He charges young people to work well and work hard even as they may offer their services freely. “Do it with all your might and all your will.” He said it was these efforts that led him to ‘an open door’ to greater professional opportunities.

Hamilton said Wednesday’s honour was an extremely proud moment for him, noting too that being a civil servant was all about giving back to one’s country through service and dedication.

“A lot of us work behind the scenes and a lot of times we do the job that nobody really sees upfront, but we understand how the organisations work and we know that without the little wheels turning in the background you can’t get where you are going,” he said.

He added that he often thinks of himself and his fellow civil servants “as part of a greater goal”.

He said Jamaicans should not be too quick to judge the output of work that comes from public sector offices as the individuals worked assiduously and often times under extenuating circumstances to provide the services from which the public benefits.

“If only persons knew under what conditions we work at times, and the challenges that we face at times, they would garner a fresh perspective,” he said.

He said there are individuals within the sector who were hardworking, well-educated and motivated in conducting their duties who most times go unnoticed and who were “giving a 100 per cent every day,” regardless.

It was a feature of the public service which was among those emphasised by Finance minister Nigel Clarke.

He said that to truly achieve the vision of a transformed public sector, the government relied heavily on the continued commitment of the awardees to improving the efficiency of the service they provided while they also made efforts in embracing the technological shifts in how business is conducted in society.

“The public sector of Jamaica is world class and built with resilience,” he declared.

He said that steady progress had been made in this regard.

Last week, 14 unions representing 60,000 workers signed the new compensation agreement that will be implemented over a three-year period with an effective date of April 1, 2023, and will cost approximately $120 billion over the period.

Clarke added that workers within the finance ministry were working with departments and agencies in ensuring that this Christmas season was one to remember.

O’Neil Grant, president of the Jamaica Civil Service Association, who read the citation stated that the awards were being given to workers who “are the embodiment of the special theme for Civil Service Week, ‘The Public Sector: Forging Ahead with Determination’.