As a man: Mus be a man driver 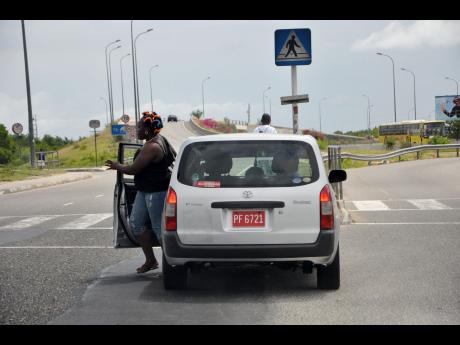 In the stereotypical Jamaican traffic scenario, there is always an 'eediat drive' on the road. Other motorists and their passengers, as well as pedestrians, can see the vehicle which has offended 'road sense' (if not traffic laws), but the sex of the person behind the steering wheel is not yet known. Yet, someone declares "a muss a ooman driva dat!"- the assumption being that a man would never be that incompetent or stupid.

In a scenario where the driver who is deemed to have done wrong can be seen, and it is a woman, the bias is confirmed, so there is a self-satisfied "ongle a ooman woulda do dat!"

It is the verbal vestige of a prejudiced view of female drivers, which, at its current most extreme worldwide, sees women in Saudi Arabia not being allowed to drive. That has led to YouTube clips of women (we hope) in burqas at the wheel in the oil-rich nation, tootling along a road in subterfuge as part of the movement to have women officially moved from the passenger to the driver's seat.

Back in Jamaica, one of the assumptions which I have heard bandied about is that "ooman driva coward". And that is supposed to be a bad thing? Not in my book. Up to early October, out of about 280 road fatalities in the country, all but approximately 40 were men. This imbalance is nothing new; between 2000 and 2003, 19 male drivers died for every female driver killed on Jamaica's roads, which distressed the National Road Safety Council greatly.

Female drivers for the Jamaica Urban Transit Company (JUTC) have gone a far way to debunking myths about the innate incompetence of female drivers, after the first woman hitting the road at the wheel of one of the large buses in 2005, to wide scale recruitment in 2007/2008. They are still a presence worthy of comment - positive comment, in my experience sharing Kingston's roads with them.

I grew up with a mother who travelled a lot across St Thomas doing her job with the Social Development Commission (SDC) and have many memories of being safe in the passenger seat. Her sole accident was caused by a male driver who gave the station wagon she was driving a hell of a wallop.

With wrapping the hands around the steering wheel all wrapped up in macho culture, I find myself saying "a woman wouldn't do dat" very often. Anytime I see dangerous driving and cannot see the driver, I assume it is a man. If I can and it is a woman, I am very surprised.

So a few days ago, I am behind at JUTC bus at the University Hospital of the West Indies (UHWI) gate, heading towards Papine. The bus stops at the designated area, I stop behind it and a car (white station wagon) blasts around us both and comes very, very close to slapping a female pedestrian who is crossing the road to the bus.

A woman driver wouldn't do that.

For a country where there are still quite a few male proclamations against oral sex, male drivers sure as hell love to blow. The amazing thing is that when the traffic light changes to green, chances are the first blast of a horn comes from a male driver very far from the front of the line.

Driving at a safe speed and a vehicle comes up to within three feet of your bumper, the intention being to get you to 'drive up'? Invariably a man. The headlights of an oncoming car flash at you just before (or at the same time) it swerves across your lane? Only a man.

Then there is the intermittent testing of another driver's abilities. A situation requires that a male driver make space for another car to manoeuvre. What happens a lot? He creates the barest minimum room and demands "waapen, yu cyaan jive?"

Add to that the male drivers who 'give a bligh' to another driver with a bark of command or a waving arm that says "gwaan nuh eediat!" The motor vehicle is the greatest macho tool. Use it to intimidate and drive off, cuss off another driver or pedestrian and stay safely in the vehicle.