Our history in quilts 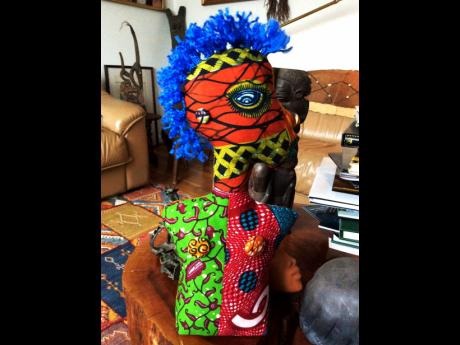 Contributed
A piece she made from her brother's collection. 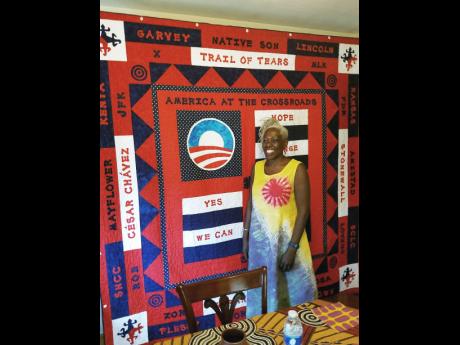 Contributed
Cooper in front of one of her quilts, America at the Crossroads. 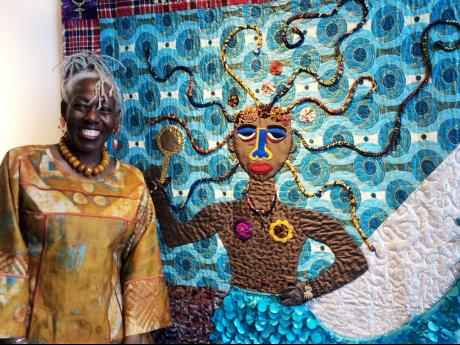 Contributed
Donnette Cooper with her piece, River Mumma, at the opening of the exhibition at the United Nations for World Water Day. 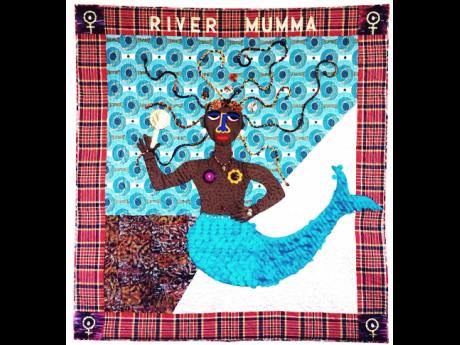 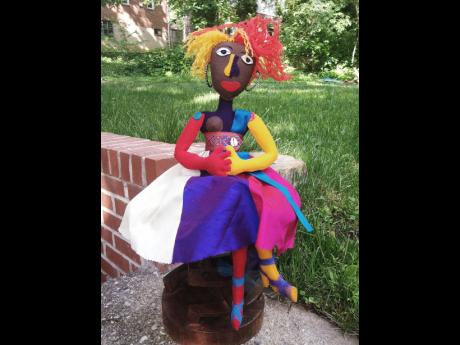 Contributed
One of Cooper's dolls, showing her numerous artistic and creative sides. 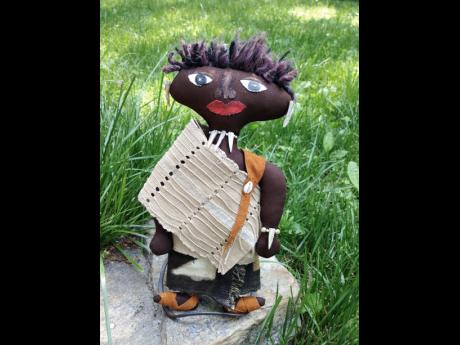 Contributed
One of Cooper's dolls. 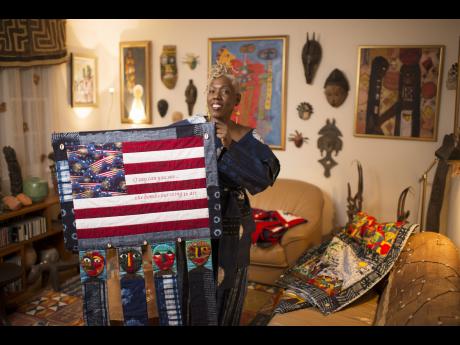 Contributed
Donnette Cooper in her living room holding ‘Bombs Bursting in Air’, made to commemorate the 50th anniversary of the Birmingham bombing of four girls at church.
1
2
3
4
5
6
7

National Hero Marcus Garvey said: "A people without the knowledge of their past history, origin and culture is like a tree without roots."

These words mean a lot to attorney-at-law Donnette Cooper, who on Saturday (September 24) saw one of her dreams come true - the opening of the Museum of African American History and Culture, in Washington, DC.

In 2001 when then United States President George Bush convened a commission to explore the feasibility of the museum (signed into law in 2003), Cooper was the first to lend tangible support.

"When I came to Washington, DC, to attend Howard University School of Law, one of the benefits I experienced was the rich artistic, cultural and living heritage of the Smithsonian Institution," she said.

"As I explored the museums, I soon became aware of two necessary pillars of the American experience that were missing: the American Indian and the African American. How could the American story be told without these voices? Having complained so bitterly and watched the process fairly closely, I felt compelled to put my money where my mouth was. That very December, as I made my customary donation to the National Museum of African Art, I also made a donation to the museum that was to be."

Why so passionate? She told Outlook: "It is imperative that the lions tell their own stories. Our narratives define who we are, and what we believe about ourselves defines who we can become. It is also important for others to know the whole story and understand their relative place in history."

STORIES OF THE QUILT

Cooper tells part of 'the whole story' through her quilts. "The quilts that I make are designed not just for visual impact but to tell stories and convey messages."

She was introduced to sewing at an early age by her maternal grandmother, May Lyons. "One of my first jobs was threading her needles as her eyesight began to fade," Cooper recalled. "I was also influenced by my father, Daniel George Cooper, a bespoke tailor of exceptional talent. I enjoyed watching him build a suit. I was intrigued by the tools of the trade, especially that awesome goose iron that devoured hot coals; and I was greatly impressed by his intensity, dedication and artistic flair."

Cooper later experimented with textile art, exploring tie-dye and batik at St Hugh's High School, later expanding her knowledge and skills under the tutelage of Dawn Scott, Jamaica's master batik artist. She also took clothing construction as an elective course in college and began making her own clothes.

"My first quilts were utilitarian gifts for young children made with juvenile prints. My first art quilt - 'Joy' - was made as a Christmas gift for my sister Carolyn Joy in 1991. She thought it was so magnificent that she gave it back to me. She thought I should keep my first quilt in my own collection. I later made another one for her. 'Joy' was included in an art book - Spirits of the Cloth, Contemporary African American Quilts by Carolyn Mazloomi."

Quilting offers Cooper a vehicle for free expression. "As a transactional attorney practising primarily in affordable housing financing, quilting provides a welcome counterpoint. Quilting offers me creative expression; the licence to dream and the privilege to channel thought into form; the independence to be guided by passion; and the opportunity to meld many interests, such as travelling, collecting fabric, challenging historical suppositions, fostering creative communities and using art. The quilt form, in particular, is a mechanism to reconstruct and reimagine an African identity not distorted by the Middle Passage, enslavement and colonisation."

Cooper said she is influenced by African textiles and the individual, cultural and spiritual messages they encode. "My work integrates African cloth, self-dyed fabrics, commercial fabrics, recycled scraps, beads, cowry shells and other embellishments to tell stories and explore cultural values and collective memory. I particularly like working with scraps and recycled clothing - reconnecting the torn, disparate pieces into a new form that is different from the original yet connected to it."

Cooper has a deep connection with her creations. "They are imbued with my heart and soul. My quilts are like children I have sent out to interact with the world. I have a message to convey but recognise that my message and the viewer's interpretation will merge and create a new understanding, subject to constant reinterpretation."

These messages are being seen around the world. Cooper's work has been part of numerous exhibitions, each holding a special place in her heart.

"The quilt was prominently featured in the exhibition and later included in the book, Journey of Hope, Quilts inspired by President Barack Obama."

Earlier this year, her piece, 'River Mumma', was featured at an exhibition at the United Nations in Geneva, Switzerland. Mounted to commemorate World Water Day, the exhibition had a humanitarian purpose - to shine a light on water insecurity and the impact on women and girls. "'River Mumma' took our African-Jamaican mythology to the world," said Cooper. The exhibition has since toured Rome and will travel to venues in the United States, including the New England Quilt Museum.

Before being smitten with law, Cooper's love was teaching. "I graduated from Clark University, Worcester, Massachusetts, with a BA in Psychology and minors in education (with Elementary Education Certification Credentials) and sociology. For four years after college I taught, including in the teacher-training programme at West Indies College (now Northern Caribbean University) and worked as a counsellor with children in residential care. Although I have stopped teaching formally, teaching will always be in my blood. My mother was an elementary school teacher and her avocation has had a lasting impression on me."