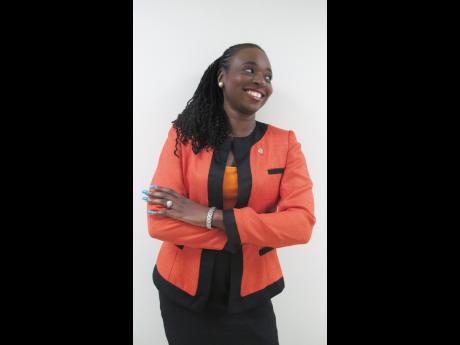 There was a time when some would have never thought women would dominate segments of society, especially the business world. Today, women are at the helm of success. CEO and senior partner at Above or Beyond (formerly Job Bank), Dr Sandra Palmer, is what many would describe as a flourishing and extraordinary woman, making her place in a world once ruled by men.

Born and raised in Topsham, Manchester, Palmer has always been driven by the desire to be successful. She remembered lying in the grass and looking up at the sky. "I would get lost in the floating clouds, thinking of how I could grow up and get successful, make my family proud and become well known," she told Outlook in a recent interview. Inspired by her mother and successful women such as Oprah Winfrey, Palmer embarked on the road to success, but the journey wasn't easy.

Her first disappointment was a failed attempt at the Common Entrance Examinations. It was then that she vowed, "This is not going to happen to me again. I am not going to fail at anything. I am going to be the best."

Her second attempt gained her a place at the Bishop Gibson High School for Girls. Intensely competitive throughout her high-school years, Palmer always copped first or second place in all her classes. During her this time, she was on a mission. "From first form, I wanted to be the head girl in order to be the valedictorian for my mother. I just wanted her to be in that audience and see that her daughter, the same one who wasn't light-skinned and didn't have straight hair, was the one standing up there," she said. Despite Palmer not being chosen as the head girl but, instead, deputy head girl, she still managed to be valedictorian.

Palmer moved on to the University of the West Indies, Mona campus. Working full-time at National Commercial Bank, Matilda's Corner branch in St Andrew, and studying part-time as a natural sciences student, Palmer failed her first-year at university. Faced with sitting out a year of school, she begged for, and was granted, a second chance. This time it was in arts and general studies.

Overcoming this hurdle did not end her struggles at university. In November 1990, Palmer met in a motor vehicle accident. Her ankles were badly broken and she was told she would never walk again. Determined to succeed, she kept believing in herself. "When you are told at an early age you would never walk again, that is rough. But I never believed that that was my reality," she said. Palmer graduated in fine style in 1991 with a bachelor of arts degree with honours.

Today, Palmer has emerged as one of Jamaica's most successful female entrepreneurs. But it didn't dawn on her that this was her destined path until the final month of her MBA programme, and while serving as the corporate executive accountant of Infograce. "I wanted a situation where I could create my own future, instead of having the boss or company create it. I was like, 'I can't continue, I can't go back, I have to go and do it on my own,'" Palmer recalled.

Her first step towards entrepreneurship was SSP APTEC, established in 1997 in Jamaica and 2002 in Florida, and she has been a serial entrepreneur ever since. Although she suspended her duties as CEO of the companies in both countries in 2010, the World Bank named Palmer one of the most successful female entrepreneurs in Jamaica and Latin America that same year. "I was surprised! I felt very proud and humbled. It gave me even more motivation to do more. To whom much is given, much is expected, and if they saw that in me, then clearly, I have to live up to the expectation."

Having gained more than 20 years of experience in business and entrepreneurship, Palmer no longer sees failure as an obstacle. "Success gives a false sense of security. You learn so much more from failing than succeeding. Sometimes you fail forward - you fail, but you learn more."

Blessed with several opportunities to manage organisations such as Eagle Information System Limited, and consulting at organisations, including the Betting, Gaming and Lotteries Commission and FLOW, Palmer has learnt some valuable lessons. One such lesson, Palmer said, is that "it is better to have tried and failed than to have never tried at all".

As a results-oriented leader, Palmer is motivated to help others excel. "I really want to make a difference. If I can impact one person with every interaction, I think that is good. And I like to see people become the best version of themselves," Palmer said. What better way to do this than by teaching? Palmer lectures in business and entrepreneurship at the Mona School of Business and Management and at Northern Caribbean University.

As a lover of nature, Palmer enjoys taking drives to the country. She's an avid reader and likes to play golf, but confesses that she needs more time to practise. Palmer is also an author and a motivational speaker.

Sometimes, females are discouraged by family and friends not to pursue their goals. Palmer said this doesn't mean that they are bad, because oftentimes they want to protect you. She noted that as a woman, you should be ready to take risks and "believe in yourself, don't give up on your dream. Don't let anybody tell you that what you are thinking and dreaming cannot happen."

This is how some of Palmer's employees describe her:

- "Just one word - perfectionist. She likes everything to be done the correct way at all times. She also believes in structure and organisation."

- "She's very fair and really show's an interest in us as individuals and not only as her employees."

- "She is extremely detailed, very fun to be around and cares about her employees. She always urges us to aim for world-class status."