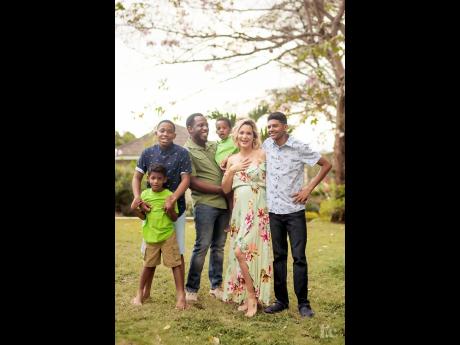 Contributed
Wayne Marshall is joined by his sons and wife, Tami. 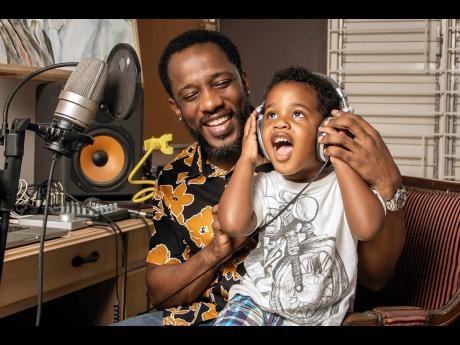 Contributed
Wayne Marshall having fun in the studio with his son, Atlas.
1
2

“Fatherhood means everything to me.” That unique kinship between father and child has been by far the most rewarding experience for Wayne Mitchell, also known as Wayne Marshall.

Outlook had a heart to heart with the singer recently about his enlightening journey, marshalling through fatherhood.

The father of three boys confessed that it wasn’t until he became a father that he truly became a man. “I found myself shedding some of my more immature ways because I saw and understood the responsibility that I had now to the human being coming into the world.” He continued by sharing this sentiment, “You don’t have to pray, question or ask what God wants of you in this situation. You know God wants you to take care of this spirit, this young person. So my mission is to make sure I rise to the occasion and make my children the best people that they can be. It is a role that I take very seriously. Fatherhood has definitely been a game changer and life changer.”

As far as parenting goes, he revealed that every child is different. Some are strong, while others can be weak in certain areas. So, it’s best to deal with each of them appropriately, based on their mannerisms and personalities. Every experience is different. The more children he has, the greater his responsibility to support them becomes.

“My parenting is based on how I was parented. My father was strict, but knew how to loosen up when needed. There were times that I didn’t understand what he was doing and thought that he was too hard on us, but looking back, I understand because he only has boys, and currently, I only have boys as well, and they can be a handful. So I have an even deeper appreciation for my father’s attentive and bonding style. You can’t be too easy-going with them, you have to be strict, too. I try to be both a father figure and a friend, or even big brother, to my children so that they can come to me when they need to.”

Marshall prides himself on being a hands-on dad, mastering the art of changing diapers and preparing bottles for his children. He likes to take the pressure off Mommy, especially during the early stages of parenting. Fatherhood, he says, is momentous and carries different dimensions to it. Knowing that it would not be easy, he embraces new challenges as a means of learning.

He has always been a musically inclined creative and hopes that his children would master the art, too.

Marshall and his children share the love of sports. He writes and creates songs with Giomar, affectionately called ‘Gio’. Jackson, also known as ‘Jax’, is currently learning to play the piano, and the proud dad said that he is excited about it. And the last boy, Atlas, he says, is something else. They watch children’s shows together.

The one thing he is thankful to the mother of his children, Tami Chin, for, is showing so much love to their children, “Tami knew she was a mom before she was a mom. And it came so naturally to her. She has made remarkable strides in that department, getting a greater understanding of the role with each child. It’s an honour to co-parent with her. She’s very nurturing, loving, and really the backbone of this family.”

He also noted that watching her give birth truly redefined how he saw her as a woman and encouraged him to step up to the plate as a father. “It’s always amazing to watch the birthing process. When you are present in that moment, there’s something that is supposed to really click within you. That changed me completely. It changed how I perceived the woman and the strength of the woman. The glory of that moment, there’s nothing like it.”

With another boy on the way, his advice to first-time fathers is to just embrace the new role. “You won’t know everything. Some things you will know intuitively and instinctively, but there are others that you will have to learn. Sometimes your children will be right and you will be wrong. But there’s nothing too daunting, men have done it before, so you’re capable of being the best dad.”