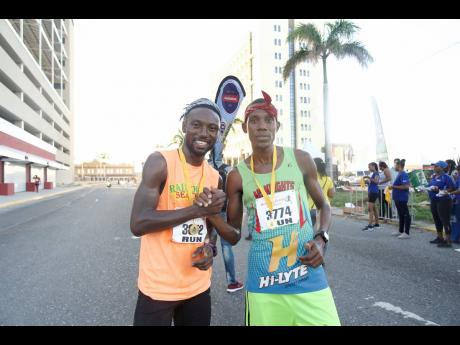 Contributed
Kemar Leslie (left) of Rainforest Seafoods and Ryan Chambers of AIS have had a friendly rivalry every year of the challenge. 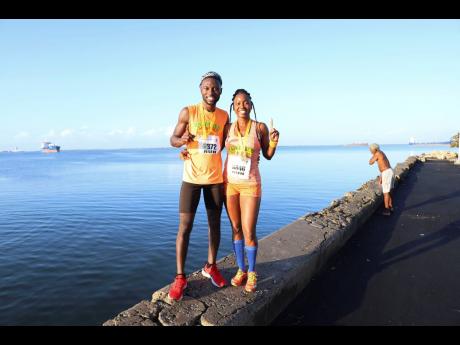 Contributed
Kemar Leslie (left) and Alison Sutherland, team captain of Rainforest Seafoods, enjoyed the views at the waterfront after the race. 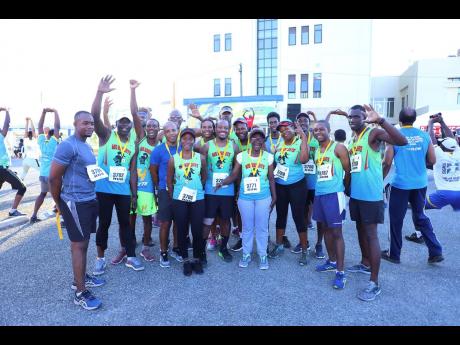 Contributed
Members of Team AIS were excited for the downtown Kingston waterfront sights along the race route.
1
2
3

The final race in the Jamaica Moves Corporate Challenge, The JSE 50th Anniversary/Welcome To Kingston 5K, was hosted earlier this month and staged at the Urban Development Corporation’s waterfront lot on Port Royal Street. The route looped through the streets of downtown Kingston, highlighting the best of the waterfront, including the newly renovated historical buildings for which the area is known. Proceeds from the race will go towards the Victoria Jubilee Hospital’s Neonatal Department and The University Hospital Newborn Special Care Unit/Neonatal Intensive Care Unit.

While the third circuit of the Corporate Challenge came to its end, several participants wished that there were more races left in the challenge as the energy remained high during the warm-up session, along the race route, and during the cool-down session.

Kurt Dunn, team captain of FLOW, remarked, “The challenge has been a great initiative, I’m so sorry that it has actually come to an end. This was our second time entering and we will enter again next year. We were in fifth position last year and currently, we’re in third, so we’re waiting to exhale once the final results are out.”

‘We likkle but we tallawah’

Sheree Gordon of Derrimon Trading, who was proud of her small but mighty team, expressed, “We likkle but we tallawah, and it has been a pleasure to be a part of the challenge this year again. The Jamaica Moves movement is very good. As a team captain, it has been hard getting everyone to wake up in the morning to make it to the races; however, those who have made it have seen a difference – they are getting fit, they have lost weight, they are saying, ‘Thank you, Jamaica Moves, for making it happen’. When we run these races, the entry fee goes towards a worthy charity and we’re having fun! We are honoured to be a part of the move and we’re looking forward to next year again for Circuit 4.”

Kemar Leslie of Rainforest Seafoods has participated in all five races and has been atop the leader board consistently. He has had a friendly rivalry with Ryon Chambers of Advanced Integrated Systems (AIS).

“From the challenge has started me and Ryan from Team AIS have had a rivalry. I won the first year, he won the second year, and now we’re in the third year. The challenge is good because it helps you to keep fit. You have to train so you can win, drink water, and ensure that you put in the work daily,” he explained.

While the challenge has come to an end, The Jamaica Moves campaign hopes that it has inspired participants to kick-start and continue the healthy habits learned, such as regular exercise, drinking water and eating a healthy diet, in preparation for the races. The competition spanned May 19 to July 14, with five races in the circuit – Food For the Poor’s 5K Walk/Run, the Tru-Juice Cross Country 5K Run/Walk and 20K off-road cycling, Everyone’s A Winner with Best Dressed Chicken 5K and 10K, Running Events’ School’s Out 5K, and the Welcome to Kingston 5K.

The Jamaica Moves programme hopes to reduce non-communicable diseases by 25 per cent by the year 2025 through healthy lifestyle education and increased physical activity.