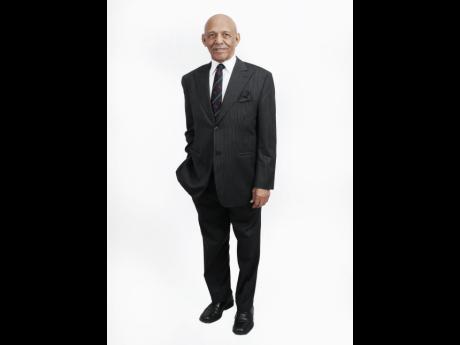 On September 28, 2017, The Caribbean Maritime University (CMU) honoured Ishmael Emmanuel Robertson as part of their Charter Day celebrations, granting him the award of Doctor of Science (honoris causa) in International Shipping and Logistics. In their official citation, they mentioned his "solid investment, commitment, and contribution to the maritime and logistics industries". For his part, Robertson described the honorary degree from the newly minted CMU as an unexpected honour.

A well-respected figure in the shipping industry, Robertson served as a member of the board of the Caribbean Shipping Association. He was also vice-president of the Shipping Association of Jamaica (SAJ) and played a leading role in the drafting and passing of the Jamaica Shipping Act 1998.

Recently, the SAJ sat down with him in an interview to reflect on his life and work, which has been richly rewarded by the CMU.

Born in 1934 to Edward and Hilda Robertson in the deep rural district of Robins Hall, Manchester, Robertson shared that he was guided by strong community principles instilled by his parents, his father being the founding chairman of the Christiania Potato Growers Cooperative, which is now producing 80 per cent of the island's requirement of Irish potatoes.

When he began his professional life, Robertson was a marketer and entrepreneur by nature. He was keen on observing the growing market for shipping as well as the development of trade, which led to him being heavily involved in the shipping industry.

"When I left the Agricultural Marketing Corporation to set up my own business, I realised that there was a big and growing market for shipping. I was particularly influenced by the Jamaica Freight and Shipping Company," he said.

"Trade was developing heavily," he recounts. "The trade had shifted from Europe, and a lot of goods were being assembled in Miami and then containerised to Jamaica"

In one of the most fascinating parts of his recollections, Robertson shared that he received a loan from the Canadian International Development Agency to purchase a Canadian container ship, which he named the Corah Ann after his daughter. He later purchased the MV Hermenia through a loan from the British Ministry of Finance. In conjunction with his shipping companies Cold Port and Port Cold, he facilitated the importation of grain and wheat to Jamaica for more than a decade.

Robertson was concerned about the development of maritime training and development in Jamaica, and his ships facilitated the training of Jamaican seafarers at the Jamaica Maritime Institute (now the Caribbean Maritime University). "Although I formed the crewing agency for my own commercial benefit, the plan was to crew from the school to the world. Well, the school had to exist, and without the crewing agency, the Norwegian government (a key stakeholder in the institution) was going to withdraw its support."

Crediting much of his success to his parents, he described his involvement in the shipping industry. "I think they made me," he said of his parents.

"When I look back, my mother and my father were community persons, and it was not difficult to give, to support, to help. That came from the church and my family."

Robertson is very grateful for this honour from the Caribbean Maritime University.