Regional forum advocates for greater inclusion of women in maritime 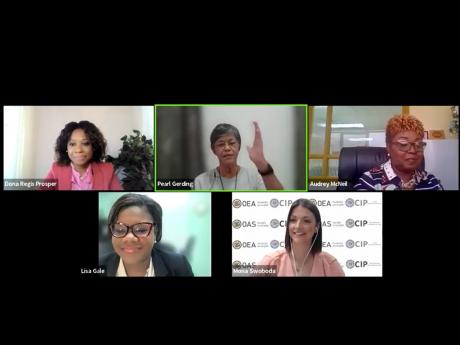 Contributed
A screenshot from the roundtable discussion on gender equality and inclusion held by the Secretariat of the Inter-American Committee on Ports of the Organization of American States and the Women in Maritime Caribbean Barbados chapter.

Greater inclusion of women in the maritime sector will help to spur competitiveness in the industry. That was the message from several female shipping executives during a webinar organised by the Secretariat of the Inter-American Committee on Ports of the Organization of American States (OAS) and the Women in Maritime Caribbean Barbados chapter on April 5.

The programme was themed ‘Gender equality in the port-maritime sector: Inclusion as a catalyst for competitiveness’ and included a roundtable discussion where participants discussed factors affecting greater gender equality and how it may advance the industry.

General Manager of the Antigua Cruise Port, Dona Regis-Prosper, said women in the industry have a responsibility to engage others and provide opportunities for who are interested and qualified.

“Collectively, we need to start talking. There was a time where I was very shy about telling my story. I didn’t think that there was a story, but the more we talk about things and the more we shine a light on certain things, it’s the better it becomes,” Regis-Prosper said.

She continued, “Other women, when we get into certain positions of influence, open the doors for other women. Talk about it. Often you hear persons talk about ‘I had a bad experience with a woman leader’, ‘I felt as if this woman was keeping me back’. I think that that needs to stop, and that is one of the things that we could do.”

Compliance coordinator for international ship and port facility security at the Port Authority of Jamaica, Audrey McNeil, shared comparable sentiments when asked how women can break down barriers in the industry.

“I’m one of those that stumbled up to the maritime industry and port security, so I would start by saying educating more women about the possibilities that exist within this industry for them. And now, as opposed to when I entered, there are even more possibilities,” McNeil said.

She added that women are under-represented in maritime, and often absent from career presentations to the youth about the field. “It is those same careers that people are accustomed to, and many of the traditional career paths that women used to automatically embrace no longer exist. They’re left behind, and now we need to open the minds of young women and let them see that there’s so much more out there within this industry, and that they can have a successful career.”

For her part, Lisa Gale, director at the Barbados Port Inc, said hiring practices at maritime firms can assist with improving diversity and inclusivity, adding, “But also within these hiring practices, we can ensure that we look for key competencies in the persons we include, in job functions that we are looking for.”

Pearl Gerding, manager of security at the Suriname Port Management Company, encouraged young women to consider maritime roles, particularly in security, as there are opportunities there. Gerding said, “You can help to bring development, not only at the port as a whole, but also for the security in particular. It is you who will help shape the whole scene of the port, security-wise. And at the other side, maybe you don’t even notice it, but you are also in the position to teach persons how they have to behave when they come to the port and what is expected from them and here is not a free-for-all or a Wild West.”

The roundtable forum was moderated by Mona Swoboda, programme manager at the OAS Secretariat of the Inter-American Committee on Ports.