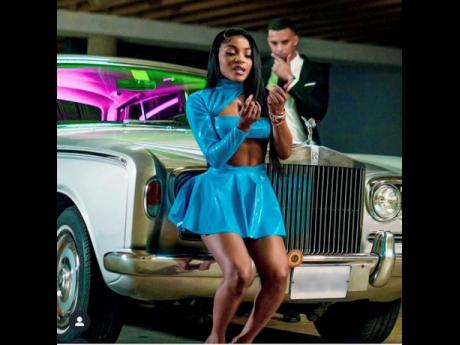 Contributed
Entertainer, Moyanne, dressed by Nash, in a scene from her trending video, ‘Backseat’. 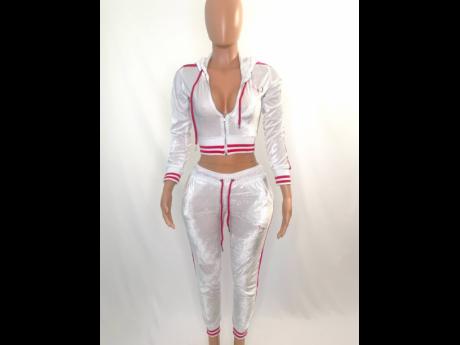 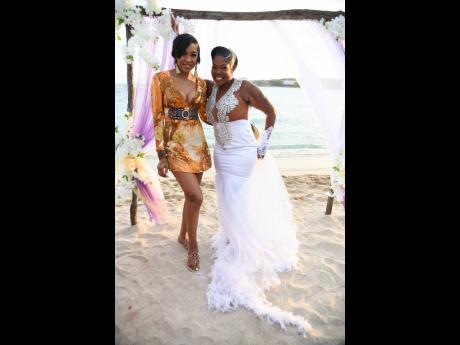 File
Queenie’s NashWear wedding dress was made in less than three days. The happy bride poses with friend and musical collaborator, D’Angel. 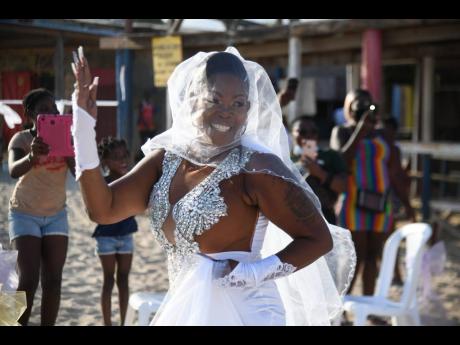 Ricardo Makyn
Queenie shortly after she arrived for her wedding on the beach. 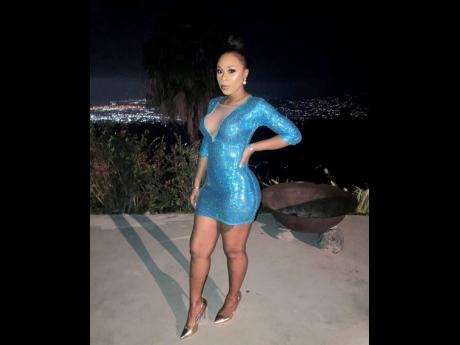 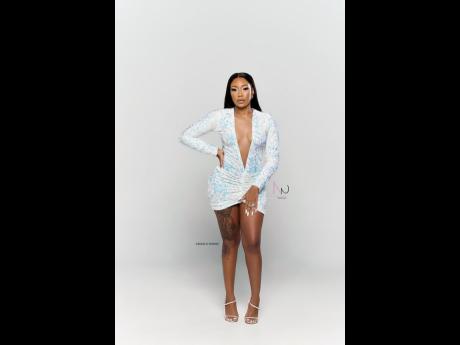 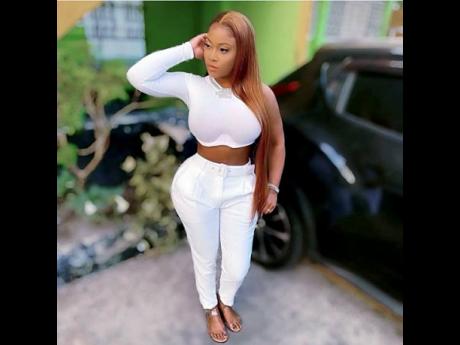 Fans of ‘royal couple’ Queenie and Dowey would realise by now that the bride actually had, not one, but two fabulous wedding dresses – an exquisite, traditional lace, fairy-tale gown and the stunning, ultra-modern, pearl white mermaid sweep dress, complete with veil.

Queenie chose the latter for her big day two Saturdays ago at Hellshire Beach in St Catherine, and with her hair in an upsweep and her makeup perfectly done, she was a truly stunning bride. In an effusive, post-wedding day ‘thank you’ note on social media, Queenie, whose real name is Janese Espeut, praised Jamaican designer Nashanda McFarlane, of NashWear Clothing.

“Thank you for making my dress in such a short time. Girl, you are the best God bless your hands,” the London-based social media personality and dancehall artiste, whose IG name is Queen Ladi Gangsta, shouted out as she urged her followers to “go follow @nashwear_clothing … tell her the Queen sent you”.

And, the ‘royal subjects’ hastened to do their queen’s bidding, deluging NashWear with hundreds of messages.

“I got so many compliments! There are the people who know me, who said they knew it was my design as soon as they saw Queenie, and then there are those who were knowing of me for the first time. So, it has really been a big endorsement for me from Queenie,” Nash told Flair.

Unsurprisingly, the story behind the eye-popping, body-hugging wedding dress, which, in this era, would certainly have deserved an Instagram account all of its own, is as fabled as Queenie’s ‘royal wedding’ to her fiancé Dowey, on his 31st birthday.

“The turnaround time was three days,” a pleased Nash said, acknowledging the truth of the adage, “good frien’ betta than pocket money” in this classic journey of knowing somebody, who knows somebody.

“I have a friend who is a good friend of Queenie. My friend hit me up and said, ‘How yuh nuh fi a mek Queenie wedding dress?’ So the friend reached out to Queenie, but she said that she had a dress already,” Nash explained.

Nonetheless, Nash sent her an idea of the type of dress she had in mind. Queenie took one look at the design, and the rest, as they say, is history.

“I got the call on the Wednesday before the wedding. Queenie came and did her measurements on Thursday, and by the Friday at 5 p.m., she picked up her dress and got married in it on the Saturday,” the NashWear designer told Flair.

Many of the more than 12,000 viewers who tuned in to watch the live-stream of Queenie, 51, and her aspiring deejay fiancé getting married, had kudos for the designer. Among the comments were: “Da dress ya sell-off.” “Me a guh need yuh when my wedding fi come yuh bad nah lie.” “Smashing. When girl full a talent til shi buck.

Nash says she is still basking in the glow of the compliments, and admits that she didn’t attend the festive affair. “I had too much work to do that had deadlines that I had to meet,” she explained. “I make clothes for everybody, plus-sized, slimmas, curvy divas, persons who like to be covered up, those who don’t. Whatever the piece, when you see a Nash design, you have to say ‘beautiful’, and my clients are always pleased,” Nash added.

The hard-working designer, who is the face of her brand, has stretched her fabric across North America, where she has a lot of clients. “I work with a lot of people in US and Canada, and to be honest, 2020 was my best year. My overseas work tun up,” she said, quite excited.

Nash explains how she interacts with clients who she is unable to see in-person. “Once a design is decided upon, to get the measurements, we do a video call. They get a tape measure, and I tell them how to measure exactly what I want, and once I have that, then I can do my job,” she said.

NashWear creations include dresses, pants, tops, swimwear, sports-wear in various styles and fashion, and although she likes a lot of “bling”, NashWear also designs simple stuff. She has had a showing at Pulse’s Caribbean FashionWeek, where she won one of the design competitions in 2016, and she desires to expand into ready-to-wear and shoes.

It was in November 2014 that NashWear officially made its splash, and it was born out of the party-loving fashionista’s desire to stand out in a crowd, and her resolve not to ever allow a dressmaker to disappoint her. As she recalled, “I was going to Sandz, and on the day my outfit wasn’t ready. I am one of those persons who don’t want to turn up in something ready-made and see someone else in it, so I always use a dressmaker. So when the day came, and my dress wasn’t ready, I told myself that I would start making my own clothes,” the self-taught dressmaker, who said that she actually wanted to be a singer or a teacher, shared.

Nash expresses gratitude to two persons who, she says, have given her tips along the way as she designs, cuts and stitches up her exquisite creations, which have draped the bodies of popular personalities D’Angel, Spice, Sher Luxury Doll, Maya, Slickiana, Nikki Chromazz and DaniiBoo.