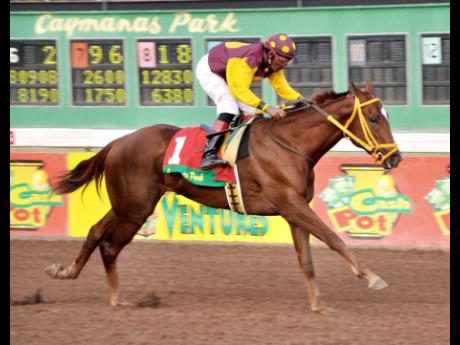 Jermaine Barnaby
file COME DANCE WITH ME with Percy Williams aboard.

CASH Pot Trophy winner COME DANCE WITH ME is reportedly being eyed by Trinidadian owners attached to Anthony Nunes' barn.

Howard Hamilton, who owns the speedy Blue Pepsi Lodge-Soca Dancer filly, said he will sell if the price is right.

Hamilton, president of Jamaica's Thoroughbred Owners and Breeders Association, confirmed on Thursday that he has been made offers, but declined to say from whom.

"Up to this morning, I got an email. Everybody is interested in her," he said, describing the speedy chestnut filly as "a nice horse".

"I will sell anything, as long as I get the right price," he added, though not disclosing the price offered. He did, however, give a hint of his assessment of her worth.

"If she has those races to win, that's a guideline as to the value to put on her," he pointed out.