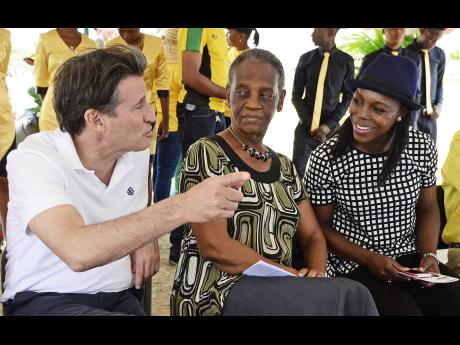 Jamaica's reputation as an athletics powerhouse has been unfairly tainted by a misconception that its athletes are not properly tested.

This is the viewpoint of International Association of Athletics Federations (IAAF) presidential hopeful Sebastian Coe.

It's a situation that clearly upsets Lord Coe, who will be challenged by fellow IAAF vice-president, Sergey Bubka, for the track and field's top job at this summer's Council meeting in Beijing, China.

The double Olympic gold medallist believes the island has been strongly victimised, and thinks the IAAF has a greater role to play in helping member federations in the fight against doping.

"I think the issue I have always consistently made is that there has been an unfortunate and inaccurate perception that athletes in and from Jamaica have been operating in a test-free zone. They have not been!" exclaimed Coe, in a sit down with The Gleaner shortly after his arrival in the island on Friday.

Coe spent his weekend in Jamaica advancing his campaign, meeting with officials of the Jamaica Athletics Administrative Association (JAAA) and touring the island's track and field

His trip coincides with that of World Anti-Doping Agency (WADA) president, Craig Reedie, who is in the island to meet with local authorities.

Three WADA officials actually visited Jamaica in October 2013 to conduct an audit of the country's testing structure following a damning report published by former JADCO director Renee Anne Shirley, which pointed to glaring issues within the organisation. This after

However, Coe argues that the lingering international perception of the island's athletes not being properly tested, particularly in Jamaica, is farthest from the truth, drawing reference to Usain Bolt and pointing to his own experiences in

the build-up to the London Olympic Games.

"I can tell you, I was the president of the Organising Committee in London 2012, and every Jamaican athlete that competed in London, just on average, was

"There has been a misunderstanding about the nature of the testing that is taking place. For instance, there is no athlete in the world, male or female, whichever sport you look at, that has been tested as much as Usain Bolt," added Coe.

"So I think there has been an unfortunate misconception, and working alongside the JAAA to make sure that these systems are as robust as they possibly can be must be our focus. That's the responsibility of an international association, our role should be to work alongside the federations to make sure the systems are as good as they possibly can be, and if they are not, to work in partnership to ensure that they are," said Coe.