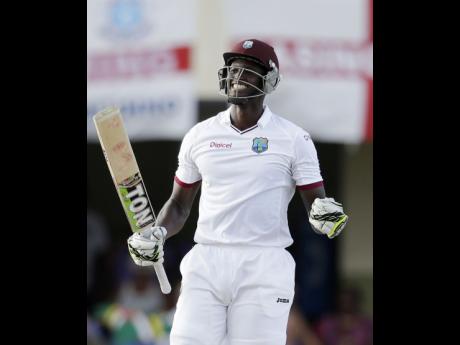 File
West Indies allrounder Jason Holder celebrates after scoring a century against England on the last day of the first Test at the Sir Vivian Richards Stadium in Antigua and Barbuda last Friday. 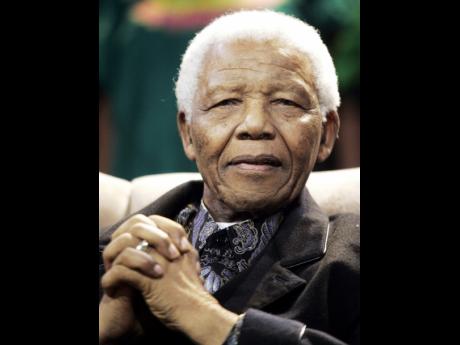 West Indies all-rounder Jason Holder says images of the late South African freedom fighter Nelson Mandela, as well as his dead grandfather, flashed through his mind after scoring his maiden Test and first-class century on Friday.

Holder, playing in only his fourth Test, struck an unbeaten hundred to help West Indies force a draw against England on the final day of the opening Test at the Vivian Richards Stadium.

The 23-year-old Barbadian conceded that a Test century has been his long-held dream.

"There were a lot of emotions running through my mind. It was something I visualised for a long time. I thanked God for it ... and I remember my grandfather who passed away a few years ago," said Holder.

"A lot of things just ran through my mind. I am a big fan of Nelson Mandela and the celebration was a little tribute to him. I have a picture on my phone where he just has his hand up in a sign of peace."

He posted 105 for the seventh wicket with Captain Denesh Ramdin who hit 57, and then put on a further 56 with Kemar Roach in an unbroken eighth wicket stand, which enabled West Indies to see out the last hour.

"When I was 60-odd or so I saw the fields they were setting and then Denesh got out so the focus moved away from me," he said.

"The English obviously set some attacking fields because they needed wickets and that freed up a lot of scoring options, and it was just for me to play the ball on its merits and try not to play any rash strokes and just be selective."

During the match, West Indies held the advantage over the Englishmen on a number of occasions, including during the first and second innings when the visitors were reeling at 34 for three and 52 for three, respectively.

Holder says the West Indies need to work harder to secure pole position in the first innings of the match.

"Winning is obviously on my mind, for sure. I think what is ideal for that situation is that we pay special attention to the first innings. I think we need to set the game up well," he said.

"Whether we bat first or bowl first, I think we just need not to let the game run away from us. If we bowl and if we bat, we need to at least bat a day and a half and bat England out of the game. I think the first innings is key to set up the game for us."

The two teams were due to arrive in Grenada yesterday afternoon for the second Test which begins on Tuesday at the National Stadium in St George's.

"It would have been a lot worse if we were going into Grenada one down," Holder said.

"It does a lot for the confidence of the team and we keep pushing the word belief in the dressing room. The guys could have more belief within themselves and we could push on and win this series."