Simmons wants play based on game situation in Test against England 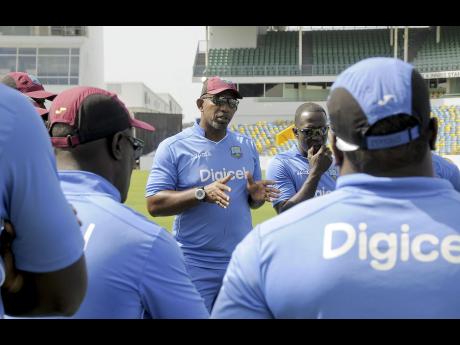 File
West Indies coach Phil Simmons (centre) speaks to members of the team during a training session at Kensington Oval, Barbados, yesterday. The team is preparing for the third Test cricket match against England, which begins tomorrow.

New head coach of the West Indies cricket team, Phil Simmons, said he was startled by his side's batting display against England on the morning of the final day of the second Test match in Grenada.

England won the Test by nine wickets and lead the series one nil.

"You hear people talk about how bad this is, or how bad that is. But when you're in the camp, it's not all as bad as people say," said Simmons. "But there has been nothing as startling as the way we batted on the last morning in Grenada. There is learning to be done."

Simmons, a former West Indies all-rounder, described the batting as 'reckless' and said the match was lost because of 'negligence'.

"We had two hours of negligence on the last day in Grenada and we lost the game," Simmons told ESPN cricinfo.

"It was a reckless period. It just needed a couple of guys to bat for another half-hour or so and we would have saved the game."

The new Windies head coach said he was encouraged by some aspects of his side during the first two Test matches, but has appealed for more consistency. He is advocating for a change in the mindset of the players, which he said should be informed by the state of the game.

"We just need our young players to understand that how they play must be determined by what the team needs and what the scoreboard reads. So they have to learn that, if the score is 40 for four, you might have to bat for two sessions and come back the next day to get your big score. The mindset has to change."

The third and final Test between West Indies and England starts tomorrow in Barbados.