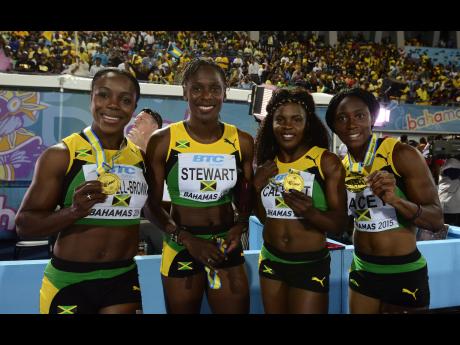 Jamaica’s 4x100m women’s team display their gold medals following the presentation ceremony at the World Relays at the Thomas A. Robinson Stadium in The Bahamas last night. The teammates are (from left): Veronica Campbell-Brown, Kerron Stewart, Schillonie Calvert and Simone Facey. 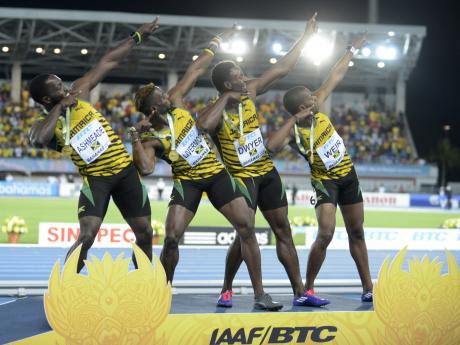 Jamaica’s men’s 4x200m team celebrate with Usain Bolt’s ‘To di World’ pose on the podium following their gold medal success at the World Relays at the Thomas A. Robinson Stadium in The Bahamas last night. The runners are (from left) Nickel Ashmeade, Jason Livermore, Rasheed Dwyer and Warren Weir.
1
2

Jamaica’s two biggest stars, Usain Bolt and Shelly-Ann Fraser-Pryce, sat out the action. But that did not stop a strong final day performance for Jamaica, which claimed two gold medals to close out the 2015 International Association of Athletics Federations (IAAF) World Relays inside the Thomas A Robinson Stadium last night.

The Jamaicans retained second position at the event, amassing 46 points, an improvement on the 41 they took home last year.

The USA again walked away with the Golden Baton after scoring 63 points. Poland (34), Australia (25) and Germany (21) completed the top five.

Bolt was seen warming up during the men’s 4x200m heats, but whispers that he could miss the final were confirmed shortly afterwards, with suggestions it was a precautionary step.

In a race that seemed more like a daytime soap opera, Warren Weir, who also took time to send a message to USA sprinter Ryan Bailey - who he believes disrespected Usain Bolt during his 4x100m celebrations on Saturday - noted that the team was even more motivated because of the American’s antics and Bolt’s absence.

Bailey ran his finger across his throat in a modification of Bolt’s ‘To di Worl’ pose after the USA’s team ended Jamaica’s unbeaten run in the 4x100m.

"We wanted to win to show that we are a deep team with many great sprinters. I want to say to Ryan Bailey, you should always pay respect to the legends of the sport. He disrespected Usain Bolt and he disrespected track and field,” said Weir.

The Germans actually crossed the line in fourth place - after a simply amazing anchor leg from American Justin Gatlin - who came from the back of the field to torpedo into third.

However, the USA were disqualified after a baton mix-up on the third exchange.

With no Fraser-Pryce in the line-up, Veronica Campbell-Brown took the reins, fighting Carmelita Jeter to the very end, as the Jamaican women took the 4x100m in a world leading 42.14, with some powerful running all around.

The Jamaicans were strong in the final of the women’s 4x400m final but they had to settle for second place to the USA, who continued to flex their muscles in The Bahamas.

The Jamaicans were strong in the final of the women’s 4x400m, but they had to settle for second place to the USA, who continued to flex their muscles in The Bahamas.

A 3:22.49 clocking was returned by the Jamaica team of Anastasia Le-Roy, Novlene Williams-Mills, Christine Day and Stephenie-Ann McPherson.

The Americans crossed the line in relative comfort, with a time of 3:19.39. Great Britain and Northern Ireland took third in 3:26.38.

Williams-Mills was satisfied with the result and believes the Jamaicans will get closer to the USA later this year at the World Championships.

“It’s always great to run with these girls and put our country on the podium. I think it was a good run for this time of the year and I know we can do even better at the World Championships; push the Americans and even get a national record again,” said Williams-Mills.

McPherson was also pleased with the effort and is already looking forward to again testing their North American rivals, which had Phyllis Francis, Natasha Hastings, Sanya Richards Ross and Francena McCorory in their line-up.

“I’m always excited to represent my country and it’s no different here. I’m happy with the effort, it’s only our second race and I’m looking forward to Beijing,” said McPherson in reference to the upcoming showpiece event set for August in the Chinese city.

The women’s 4x800m team continued their improvement, lowering the national record while repeating last year’s fifth place finish in a brave display that got the crowd on its feet.

Kimarra Powell, Simoya Campbell, Natoya Goule and Samantha James stopped the clock at 8:16.04, applying the eraser to the old mark of 8:17.22, registered at last year’s meet.

The USA set a championship record on their way to the gold medal, with an 8:00.62 clocking.

Poland were well behind in second place with a time of 8:11.36, while the Australians took the silver with a 8:13.97 effort.