Felix has a decision to make 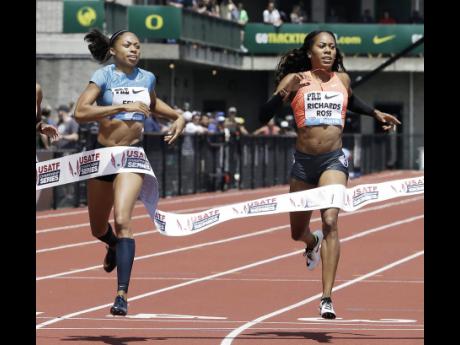 AP
Allyson Felix,( left) hits the tape ahead of fellow American Sanya Richards-Ross to win the 400 metres at the Prefontaine Classic track and field meet in Eugene, Oregon, last Saturday.

VERSATILE United States sprinter, Allyson Felix, is still undecided over her choice of event at the upcoming World Championships in Beijing.

?No, I will not because the 400 final is an hour before the 200 semi, so for me it?s not conducive to doubling,? Felix said while here for the Prefontaine Classic Diamond League meet at Hayward Field, University of Oregon.

As the 200m defending champion, the 29-year-old qualifies automatically for the event.

?I plan to run 400m at the Nationals and see if I can make the team in the 400m and then make a decision,? she noted.

The decorated American athlete, who has won a total 16 Olympic and outdoor World Championship medals, laid down solid credentials for 400m in Oregon on Saturday, winning the one-lap race in the second fastest time this season, 50.05 seconds.

After winning at Prefontaine, the three-time Olympian said she will tweak some things for 400m enhancement.

?I think I could get out a little faster. I?m just working on my race plan and being comfortable with it, that?s the most important thing.?

She is getting used to extending her body in competition again, after sustaining a hamstring tear at the World Championships in Russia 2013.

?Last season for me it was all about getting back to full strength ... I think Bobby did a great job just being patient with me, he didn?t want to push me too much. It paid off to gradually bring me along,? she explained of the restraint enforced by coach Bobby Kersee, husband of former Olympic champion, Jackie Joyner-Kersee.

?My body, just from the injury from Worlds, it took a long time to get back to full strength and so I was forced to take it easy.

?I think I?m such a competitor in everything and so to see people competing, knowing I can do it but my body won?t allow me is frustrating. But it was good he was able to calm me down,? explained Felix, who won 200m, 4x100m and 4x400m gold medals at London 2012.