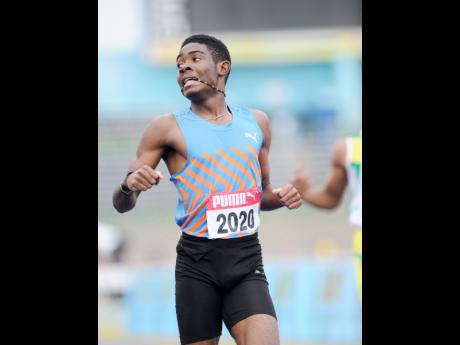 SEVENTEEN Jamaicans will be in action and by the end of today's first day, four champions should be decided at the ninth IAAF World Youth Championships at the Pascual Guerrero Stadium, here.

Today's finals include the men's shot put, women's discus throw, women's 3000m and action concludes at 9 a.m. with the final of the men's 100m.

All eyes will be on the outstanding Christopher Taylor in the 400m heats at 11:50 a.m., where he will run from lane three in heat two. His compatriot, Anthony Carpenter, lines up in lane two in heat one.

However, Kevin Nedrick will be the first Jamaican in action at 9:40 this morning in the men's Shot Put.

The men's 100m heats follow 15 minutes later at 9:55. t André  Morrison lines up in heat two while Xavior Angus is in heat four.

At 11:15 a.m. Janeek Brown and Sidney Marshall will take the track in the girls 100m hurdles

The discus throw is set for 10:30 with Shyledeen Smith set for Qualification A group and Devia Brown will compete in Qualification B at 11:45 a.m.

At 12:10 p.m., Paketo Dudley competes in Qualification Group A of the men's long jump.

The women's 400m heats wrap up the morning session at 12:40 p.m., at which time, Satanya Wright and Janiel Moore, will take the track. Moore runs out of lane four in heat five, while Wright runs out of lane seven in heat six.

The afternoon session begins at 5 o'clock. Jamaica's first athlete set to take the track at 5:10 in the men's 400m hurdles (84.0cm) will be Leonardo Ledgister and Jauavney James.

Both athletes have been drawn in lane one of their respective heats - Ledgister in heat one, James in heat two.

At 5:50 p.m. in the women's equivalent, Junelle Bloomfield runs out of lane four in heat two, and Shian Salmon lines up in heat three, lane one.

Meanwhile, head coach, Michael Dyke, will not make any predictions on how the Jamaicans will do, but said the athletes were for the most part, healthy.

"There may be one or two persons ... nothing serious, maybe an upset stomach ... but I think the doctor is on top of it," he said.

"Based on observation, I think they are in pretty good spirits; pretty good shape. I'm expecting them to do well," he added.

The Jamaicans arrived late Monday evening, but Dyke said they would not allow the long travel time to be an issue.

"We are not going to allow that to be an issue, so we made sure we prepared the athletes for that situation," he said.