Little joy for Ja in Cali 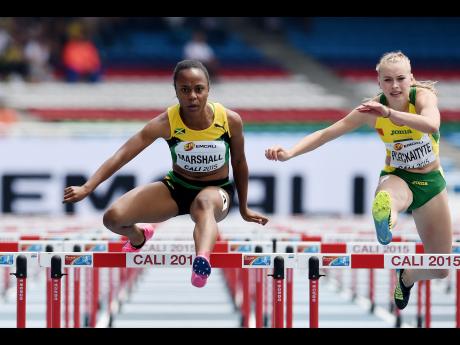 Photo courtesy of IAAF
Sidney Marshall (left), Jamaica, and Greta Pleckaityte of Lithuania in action during round one of the girls 100m hurdles on day one of the IAAF World Youth Championships Cali 2015. Marshall was third in the heat in 13.62. France’s Sarah Koutouan won in 13.62 while Pleackaityte was fourth in 14.10.

IT was hot in Cali yesterday, but Jamaica's performance on day one of the 9th International Association of Athletics Federations (IAAF) World Youth Championships at the Pascual Guerrero Stadium, was anything but.

Of the 17 Jamaicans who competed, only seven advanced to the second round of their respective events, the others falling either to injury, or just plain underperforming.

Christopher Taylor, who is the country's best hope for a gold, advanced to this afternoon's semi-finals of the boy's 400m after he finished second in heat two in 46.30 seconds. He was beaten by Colombian Anthony JosÈ Zambrano, who created a stir in the stadium as he produced a late surge to clock a South American age group and national youth record and personal best 46.27 to win.

Taylor, however, complained of a hamstring pain after his race and could be threatened in today's semi-final. Anthony Carpenter failed to get past the heats. He clocked 48.31 for fourth in his heat.

Junelle Bromfield looked impressive and a class above as she led from start to finish in winning heat two of the girls' 400m hurdles by 10-metres in 58.89 seconds.

"It was very relaxing although I stumbled over a few hurdles. I was going for a PB (personal best), but unfortunately, I didn't get it," Bromfield said. Shian Salmon clocked 1:05.56 for seventh in her heat and failed to advance.

Also through to the next round of the boys' 400m hurdles event is Jauavney James, who posted a personal best 52.38 for third in heat two. Ryusei Fujii of Japan posted a world-leading 50.87 to win the heat ahead of South Africa's Morne Van As.

Leonardo Ledgister, in the meantime, pulled up in the 400m hurdles. The athlete, who came into the event with a knee strapped, started out well, but, by the 200m mark, could be seen holding his left knee as if in pain. He did not get past the 300m mark.

Brown, who posted 13.67 in her heat of the qualifiers, said she was "way better than that".

"I never properly executed as I wanted to and I hope I get to redeem myself," she told The Gleaner.

Elsewhere, the Jamaicans struggled badly. Despite throwing a personal best 19.00m in the boy's shot put (5kg), Kevin Nedrick missed out on qualification for the second round. The qualifying standard was 19.45m or the 12 best throws, and Nedrick was 14th best. The best distance thrown was by Egypt's Shehab Mohamed Abdalaziz with a personal best 20.79.

Paketo Dudley leapt 7.16m (0.2 m/s) for the 17th best overall jump in the boy's long jump. Neither Devia Brown nor Shyledeen Smith advanced past the first round of the girls' discus throw. Brown had a best throw of 40.21m while Smith's best was 40.20m.

In the girls' 400m, Juniel Moore and Satanya Moore failed to get past the first round. Moore was last in heat five in a slow 59.20, while Moore was fifth in heat six in 57.11.

AndrÈ Morrison and Xavior Angus did not get past the semi-finals of the boys' 100m. Morrison was eighth in semi-final two in 10.85, while Angus was third in semi-final three in 10.61. Semi-final two was won in a championship record 10.30 by Japan's Abdul Hakim Sani Brown.