Boyz have made us proud 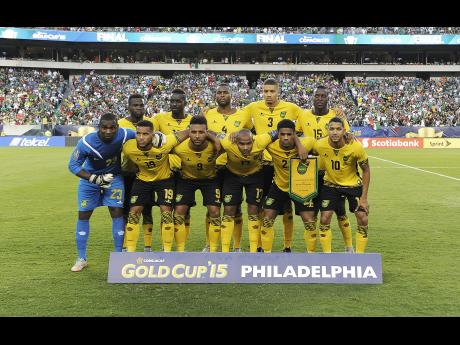 File
Jamaica’s players pose before the first half of the CONCACAF Gold Cup final between Mexico and Jamaica, on Sunday in Philadelphia.

Jamaica's Gold Cup campaign has ended with a 3-1 defeat by Mexico in the finals on Sunday. The Reggae Boyz played well, and except for an inability to put the ball in the opponents' net during the first 30 minutes of undeniable ascendancy, and two uncharacteristic errors by a central defender, whose defensive skills were one of the reasons why we reached the final in the first place, we lost to a better team on the night.

The coaching staff and players must be congratulated for a series of matches that began in the Copa America, where we lost all three games to powerhouse opponents, to the amazing Gold Cup run, where we left indelible scars on some of the previous 'Big Names' in CONCACAF. Winfried Sch‰fer, the Germany-born coach of the Reggae Boyz, is sure to be elevated to 'hero' status on his return to Jamaica to continue his contract with the Jamaica Football Federation (JFF).

His team of officials and the players themselves are not only significantly richer financially, after this enthralling run in the Gold Cup, but more important, they have demonstrated to the rest of the Caribbean in no uncertain manner that "money makes the mare run".

Before their victory in the Caribbean Cup, this group of players made it very plain that match fees could not be relegated to "promises" as they insisted on payments agreed by the Federation before continuing to play. They got what they demanded and they won!

A dispassionate fan could be forgiven for thinking that a Federation 'stuck-up' in this way would have learnt a lesson, and made changes in the remuneration package of players and support staff, before any further national competition.

Apparently no such arrangement was made and there were, therefore, reports of two incidents where player demands were met after a 'strike' and the threat of a 'strike'. Once their financial and compensation demands were met ... presto! ... success!

This reminds me of advice I got from a friend many years ago. He said: "If there is something that you need to be done, and you cannot do it, find the best person for the job, ask him how much money he wants, get the money and pay him. Never 'cut a deal' or the service you receive will be commensurate with the quantum of the 'deal' you arranged".

How many times in the past years have our sports teams been denied proper (agreed) compensation while being urged to "do it for your country"? Yet, the very same voice urging patriotism always seems to be very well compensated while the 'patriots' continue a life of mendicancy. This group of footballers could not be fooled by promises.

They have the experience of seeing what happened to their Caribbean neighbours, Trinidad, who played way above their pay grade in a World Cup campaign, only to be told (not in these exact words) "Cho man, you can't take a little joke, eh?" when they demanded promised payments. All the monies earned by the team in this tournament will be turned over to the people that earned it! The players and coaching staff.

The parent administrative body, the JFF, must now realise (for the first time, at last) that it has to get up out of its air-conditioned offices and assist marketing experts in attracting sponsors while making proper use of funds garnered from FIFA for the development of the game and not the development of a few. The indictment of two former (Caribbean) presidents of CONCACAF, the confession of a previous secretary to wire fraud conspiracy, tax evasion and money laundering conspiracy, does very little to enamour seasoned professionals to the lure of promises, like "you will soon get your money".

New CONCACAF president Alfredo Hawit has announced plans to reform his organisation by having independent committee members, term limits for executives, and the release of financial statements and exco compensation packages for its members. The only problem is that no date for implementation was announced! There is a lot of work to be done to instil public and player confidence in football hierarchy around the world. Not only should these announced reforms take place quickly, but CONCACAF must ensure that member associations also submit themselves to this reform.

Finally, after the 'high' of Jamaica's performance during the Gold Cup, we must as a people insist on a transparent investigation into the conduct of the referees during the Mexico versus Costa Rica game and the Mexico versus Panama game. It is not enough to admit that "officiating errors" were made and leave it at that. The investigation must include a comprehensive financial audit of everyone on the referee panel. Nuff said.

Well done, Reggae Boyz. You have made us proud.