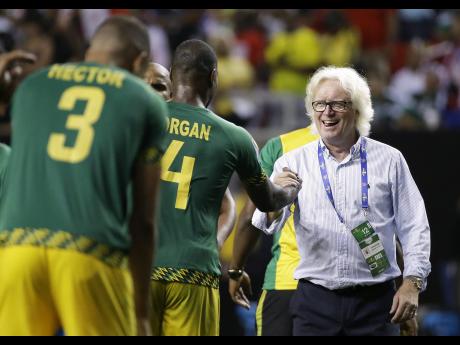 AP
A happy Winfried Schafer (right) celebrating with Wes Morgan and Michael Hector after after Jamaica defeated the United States 2-1 in the CONCACAF Gold Cup semi-final on Wednesday, July 22 in Atlanta. 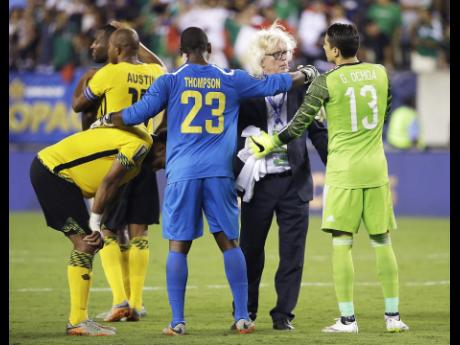 The Jamaica football group returned to the island on Monday night, a day after making history when becoming the first Caribbean country to play in the CONCACAF Gold Cup final. They had twice made it to the semis before - in 1993 when they finished third and in 1998.

Also at the tournament, where the Reggae Boyz topped Group B with seven of the maximum nine points, Jamaica beat the United States for the first time in America, winning their semi-final encounter 2-1 at the Georgia Dome in Atlanta.

Before the Gold Cup, Jamaica had participated in the Copa America, where they impressed despite losing all three group matches - 1-0 against Uruguay, Paraguay, and world number one Argentina, who were led by the world's best player, Lionel Messi.

Crowning themselves Caribbean champions in November was another big moment for the Boyz in their upward movement.

He reflected on Jamaica's historic 1998 World Cup Qualification (WCQ) and said Jamaica must not allow its programme to become "stagnant" then pumped his chest and raised his arms with clenched fists to indicate that they must continue to grow in "stature".

Having said that, the coach expressed gratitude to the clubs for releasing Jamaica's players.

"I want to say thank you to all clubs to give the players for two tournaments," Schäfer said.

Their next task will be respective home-and-away WCQ matches against Nicaragua on September 4 and 8.

"I hope our key players come back for the Nicaragua game. We need out best players, our best team for qualification," the German pointed out.

"I do not know much about Nicaragua ... (but) I believe in our team," he said. "Nicaragua could be like El Salvador, a lot of fight, difficult. In Nicaragua, it's not easy to win."

Jamaica had to work overtime to beat El Salvador 1-0 in a Gold Cup group match in Toronto.

Prior to that match, the Reggae Boyz threatened to strike before settling a money dispute with the Jamaica Football Federation. Schäfer said he wants no such distractions for WCQ games.

"We have to clear everything before we play Nicaragua. The players are to focus only on this match and for the World Cup 2018. Then we go step by step," he remarked.

Winning that tie thrusts them forward to face Costa Rica, Panama, and Haiti in a four-team group from which to advance.

"Nicaragua is a new match, a new situation than Costa Rica, Panama, (which is a) very good team; Haiti, very good team. The group is very, very difficult."

Still, he loves his team and its chances.

"I told my players thank you, thank you for your work for Jamaica," he said of their historical Gold Cup campaign.

Pointing to the shiny object around his neck, he continued: "I told them this is not a silver medal, this is a gold medal."