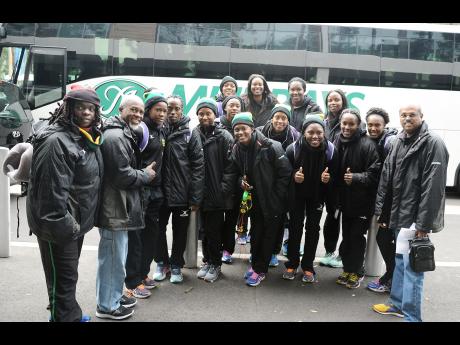 Collin Reid
Jamaica Sunshine Girls pose on their arrival at Olympic Park Village in Sydney, Australia, where the Netball World Cup 2015 games will be held.The Girls had a special training camp in Canberra, Australia, before entering the Olympic Village.

The Sydney 2015 captains gathered at Luna Park last night to mark the beginning of the sport's pinnacle event, the Netball World Cup, on Friday (today local time), with Jamaica opening their account against Samoa.

With the backdrop of Sydney Harbour, the NWC 2015 captains looked ahead to the 10-day tournament, with all nations taking the court in day-one action.

Trinidad and Tobago, and Barbados are the other Caribbean teams participating in the tournament. T&T play their opening game against Australia, while Barbados tackle New Zealand in their opening match.

The World Cup returns to Australian soil after 24 years, with Australian and international fans expected to flock to Sydney Olympic Park for the 14th staging of the event.

Prior to the captains' call, players gathered for the official Candle Lighting ceremony, a tradition dating back to the first official World Cup in Eastbourne, England, in 1963.

During the ceremony, each team captain lights a candle - a symbol of friendship and goodwill - and commits to honour the spirit of the game.

The much-respected Candle Lighting Ceremony is a sacred tradition of the NWC and gives players and officials the opportunity to honour the past, present and future of the sport before they take to the court to compete for the ultimate prize - the World Cup.