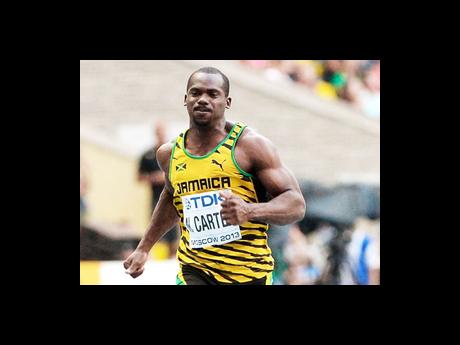 BEIJING, China:
The IAAF has turned down an official appeal by the Jamaica Athletics Administrative Association (JAAA) for Nesta Carter to be added to Jamaica’s 100 m team as a substitute for the injured Kemar Bailey-Cole.

The appeal was filed after the IAAF technical delegate insisted that Carter would not be added because he was not listed as a reserve by the August 10 deadline.

The Jamaicans had hoped that Carter, who finished fourth at the JAAA-Supreme Ventures Limited National Senior Championships, would be allowed to join Asafa Powell and Nickel Ashmeade, and wild card entrant Usain Bolt in the men’s 100m after Bailey-Cole suffered a hamstring injury during a pre-championships camp in Tottori, Japan. Team manager Ludlow Watts confirmed that an appeal was filed, but said the JAAA had already received word that the situation remained.

Watts admitted that the JAAA did not enter Carter as a 100m reserve, but noted that the understanding of the rule was that any athlete in the pool could be inserted once the change was made 24 hours before the competition.

"This is something we have done in the past without issue, so I am still surprised that we are having this problem now," said Watts.

Meanwhile, Carter’s coach Stephen Francis was extremely annoyed with the situation, blasting the JAAA for what he considered another show of incompetence, and called for greater accountability.