‘Justin Gatlin is not going to beat me’, says Bolt ahead of IAAF World Championships 200m final 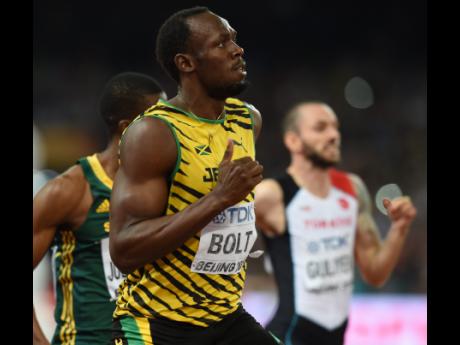 Sprint titan Usain Bolt has levelled the crosshairs squarely on rival Justin Gatlin as he goes on the prowl for his third World Championships sprint double, while Jamaica's history-making women's 400 metres quartet will look to add medals after yesterday's drought at the IAAF World Championships in Beijing, China.

Days after confirming his status as the top man of sprinting, Bolt was in a bullish mood as he looked ahead to what will be another mouth-watering clash against Gatlin - this time in the 200m final.

"My 200m is my best event. I live for this. I know I'm going to do well. It's not even a question. I'm not going to lose my favourite event," said Bolt after his semi-final. "I can tell you, Justin Gatlin is not going to beat me."

Kaliese Spencer was largely expected to add to the country's three medals yesterday, but things went inexplicably wrong for the hurdling standout, who finished at the back of the field in the 400m hurdles final in a time of 55.47.

Her younger teammate, Janieve Russell, fared much better, placing fifth in a personal best 54.64 behind winner Zuzana Hejnova (Czech), 53.50, with the American pair of Shamier Little, 53.94, and Cassandra Tate, 54.02, taking the other podium positions.

It was a shocking end to a less-than-ideal day for the Jamaicans, who also saw protests filed by the Jamaica Athletics Administrative Association (JAAA) management team here on behalf of 5000-metre man, Kemoy Campbell, who finished 15th in his heat in 14:00.55 and Natoya Goule, who ended her 800m heat in fourth place in 2:02.37, rejected by the IAAF after claims of obstruction were denied.

Simoya Campbell, the other Jamaican competitor in the women's 800m, also failed to advance from the heats, finishing fifth in 2:01.43.

In the men's 110m hurdles heats, Olympic bronze medallist Hansle Parchment was slow out of the blocks, but it hardly mattered as he comfortably won his heat in 13.33, as all three Jamaicans advanced to today's semi-final round.

National champion Omar McLeod had an early scare or two in his heat, but he recovered well to finish second in a time of 13.43, the same time registered by Andrew Riley in his heat.

Things were less dramatic in the women's 200m qualifying, as all three booked their lanes in today's semi-finals in relative ease. Elaine Thompson was impressive, running 120m before shutting off the engine and cruising to an easy 22.78 win, while Veronica Campbell-Brown, who laughably ran in the lane to her right - importantly, without impeding the athlete - also won her heat, posting 22.79 as she crossed the line. Sherone Simpson registered her best time of the season, running 22.52 in placing second in her heat.

Still, most eyes will be on Usain Bolt as he prepares for his sprinting sequel with American archrival Gatlin, who is eager to make up after losing out to the big Jamaican in Sunday's much-publicised 100m blockbuster.

Gatlin was also smooth and easy in qualifying, posting a qualifying leading 19.87 to win his heat as Nickel Ashmeade, the national champion, ensured that Bolt had some Jamaican company in the final, set for 7:55 a.m. today - running on strongly to take second place in 20.19 behind Great Britain's Jamaican-based sprinter Zharnel Hughes, 20.14.

No final for Weir

Olympic and World Championships medallist Warren Weir's miserable season continued as he had to settle for a seventh-placed finish in 20.43, missing out on the final, as did Julian Forte, who was eighth in his semi-final in 20.57.

Jamaica could win their first medal in the women's 400m since Shericka Williams' silver medal at the 2009 World Championships in Berlin, when Stephenie-Ann McPherson, Novlene Williams-Mills, Shericka Jackson and Christine Day line up in today's final.

It's the first time that a country has qualified four athletes to a 400m final at the Olympics or World Championships.