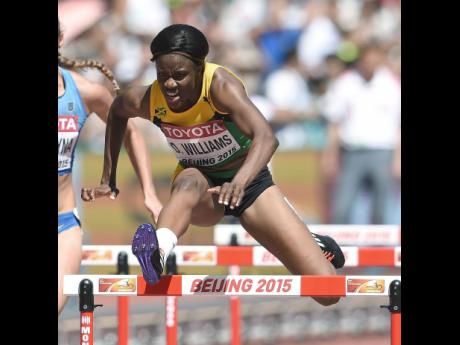 Ricardo Makyn
Danielle, who is competing in her second World Championship will begin the quest to advance to the final when she runs in heat one.

The Williams’ sisters may not be in the same semi-final heat in the IAAF World Championships 100m hurdles but their rivalry will  still  be present.

Danielle and Shermaine Williams will both be aiming to make the final of the 100m hurdles so they can renew their years long rivalry  on the track if they both make it to the last stage.

The younger of the two, Danielle, who is competing in her second World Championship will begin the quest to advance to the final when she runs in heat one.

Williams, who is the fastest Jamaican in her event this year, is aiming to lower her personal best of 12.69 as she hopes to  advance to  the final.

"The aim is to run a personal best here and in any event, I think it's what it will require to get to the finals anyway," said Williams.

The National Champion will line up against America’s national champion Dawn Harper Nelson who  has a season best of 12.48.

She will have as her main competitor American, Brianna Rollins, whose season best of 12.56 is a reminder of her recent good form.

Jamaica’s other representative in the 100m hurdles , Kimberly Laing, qualified for the semi-final as a fastest  loser after finishing sixth in her heat.

Laing’s goal in the semi-final will be to  improve her finish after fading badly in her heat.

She will run in semi-final two out of heat two with American Kendra Harris and Britain’s Tiffany Porter as her main competition.