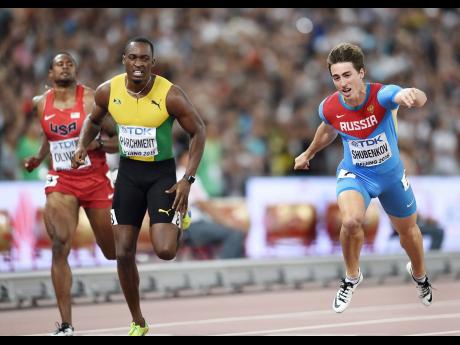 Jamaican hurdler Hansle Parchment says he is happy to have won silver in the 110m hurdles at the IAAF World Championships in Athletics but couldn't help feeling a bit disappointed with the execution of the race.

Parchment, the bronze medal winner from the Olympic Games in London, topped the clock at 13.03 seconds - his best time of the season, to finish second to Russian Sergey Shubenkov, who crossed the line in a national record 12.98 with world record holder Aries Merritt taking the bronze in 13.04.

It has been an up and down season for the powerful Jamaican, but like he did in London in 2012 and even more recently at the National Senior Championships, where he ran 13.08 and booked his spot to Beijing, despite a less than ideal lead-up to the championships, Parchment knows how to produce his best when he needs to.

"I'm very happy for this medal. I feel I could have done more, but I'm satisfied," said Parchment.

"I'm very happy. I can just imagine how my mom, my coach and the people back home are feeling right now. I think they are happier than I am because I was a little disappointed with the start, but, overall, it was a good performance," Parchment added.

"I was looking forward to a stronger start. I didn't get it as well as I wanted to, but I held my composure nonetheless because I knew that if I tried to do too much then I would mess up and that is not good for a race. So, I just kept my focus and ran through the line," he shared.

"I think I keep a level head. I try not to stress or worry too much or fret about the race. I aim for the highest every single time I go out there so I'm aiming to get on top of the medal podium," said Parchment, who is hoping that his performance and those from others competing in less popular events in Jamaica will, spark greater interest in these non-traditional events.

Parchment became the first Jamaican to win a medal at the World Championships in the 110m hurdles.