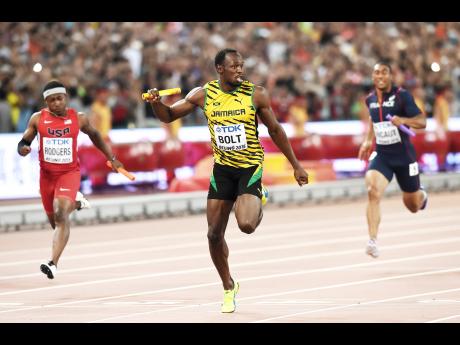 Ricardo Makyn
Usain Bolt (centre) pilotting the Jamaica team to victory in the men's 4x100 metres at the 2015 IAAF World Championships in Beijing, China yesterday. Jamaica clocked a world-leading 37.36 seconds. The United States (left) crossed the line in second but were disqualified.

Jamaican superstar Usain Bolt believes that Jamaica's dominance over the United States in the men's 4x100m relay over the past few years is down to the different approach of both teams towards the rivalry and pressure.

Bolt, who completed his triple-gold-medal grab, also admitted that the team's loss to the Americans earlier this year at the IAAF World Relays was a motivating factor for the unit, even though he had not taken that defeat too seriously and knew the team would respond strongly when it mattered.

Jamaica yesterday won their fourth consecutive 4x100m relay title at the IAAF World Championships to push their medal tally to 11 with two finals to be contested today, providing the team with an opportunity to match its best ever return at a World Championships.

Going into the straight, the Americans held a slight advantage over the Jamaicans, but the final exchange between Tyson Gay and anchorman Mike Rodgers took place outside of the designated area. It didn't matter too much in the end for the Jamaicans, as Bolt grabbed the lead shortly after taking the baton before powering Jamaica across the line in first place with a time of 37.36.

USA were later handed their disqualification, meaning that home team China, 38.01, had been upgraded from a bronze to a silver, and Canada, 38.13, got the bronze.

It is the fourth time at the past six editions of the World Championships that the USA had failed to finish or had been disqualified in a men's 4x100m race.

"This is a special win for us. This whole championship was special to me because coming back from adversity, stress, doubts, and all has just been magnificent," said Bolt, who became the athlete with the most 4x100m relay gold medals (4) and overall medals (6) at the World Championships.

"I wasn't worried. The whole team at the World Relays was not in good shape, so I knew coming into these championships we would be good to go," said Bolt. "The Americans know that we are the better team and maybe that's why they panic so much when they see us."

Lead-off man Carter, who has now won his third gold medal with Jamaica at the World Championships, said that the Jamaicans' relaxed nature and the quality of coaching have been key in their stretch of dominance.

"The USA has been doing a lot of talking and the pressure was on them. They seemed tense, but we were just having fun out there," Carter said. "We have some great coaches in Jamaica and the athletes work with the coaches well. Both parties have to coordinate and work together. I think that's the key to our success."